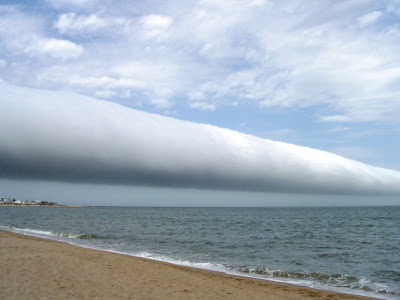 I am putting this picture in after multiple requests from my brother, Danny, a regular reader of this blog. The reason I didn't put it in when he first sent it was because as astounding a meteorological phenomenon as it is, the picture didn't have that certain je ne sais quoi that makes me snap to. It's a little flat. But I don't want him to feel bad, and so I'll let the readers tell me whether it was worth posting.

FYI - this picture, taken in January 2009 at Las Olas Beach in Maldonado, Uruguay, shows a rare roll cloud. These clouds form when a downdraft from an advancing storm front causes moist warm air to rise and then cool below its dew point. When this happens uniformly along an extended front, a roll cloud may sometimes form.

Posted by The Year in Pictures at 8:21 AM

But he's your brother, so you should make him feel bad anyway. :)

The longer I look at it, the creepier it becomes. I sort of wonder if the roll cloud has somehow devoured the dozens of people who were on the beach just before the photo was taken.

It's one of those cases where the picture can't really do justice to what's pictured. It happens quite often with landscapes. You find one that moves you, take a photo but when you later look at the pic the emotion is not there.

I am sure it must have been a really impressive phenomenon, still the pic looks somehow false, photoshopped, I don't know. Probably because it's impossible to recognize what you are seeing.

In any case it's a very good photo -Well composed, great colours, etc. - and I am happy you posted it. I didn't even suspect such a cloud was possible!

I often see interesting cloud formations and wished I had a camera. I'm glad in this case someone did.

I find it very interesting. It sort of looks like a conceptual art piece, or a collaged/photoshopped image. Great to know that nature made it happen.

It is very cool. Unusual clouds are always worth looking at not matter what the context.

I think it's a great photo composition-wise.. yes, the colours are a little flat, but the more i stare the more the lines and the composition draws me in.. I'm with your brother on this one..

Worth Posting...
Just look at the comments it generated a response.
Informative sure and (as you say) an astounding meteorological phenomenon..

As a photographer I'd love to have had the opportunity and feel I could have made a little more of it..
However a great shot of a roll cloud is not a given! I have not seen any others.
In conclusion it won't make the wall of your gallery I am glad it made the blog.
Thank you.
Hugh Gannon.

If you had the time to set up a tripod and a large format camera you probably would have gotten something really incredible on an artistic level.

This is what it is.... a very decent snapshot, and the content far outweighs the technical failings.

I love unusual cloud formations and this is amazing!

I photographed a similar cloud over Lake Tahoe in California last summer. "My" cloud was pink since it was very late in the afternoon; I didn't know what kind of cloud it was. The odd and unusual pink cloud gave the whole landscape a feeling of strangeness, as if Man Ray had designed our view that afternoon.

It's amazing what nature can put in the sky (especially when I'm not looking!

wtf, it's far better than the pic below.

despite it's technical flaws,

hat's off to your brother.

ansel adams: sometimes the subject outweighs the technique. if you take a picture of a murder with a brownie on a new york subway that's going to have more impact than the technically proficient landscape.

Reminds me of your other cloud phenomena picture, earlier.