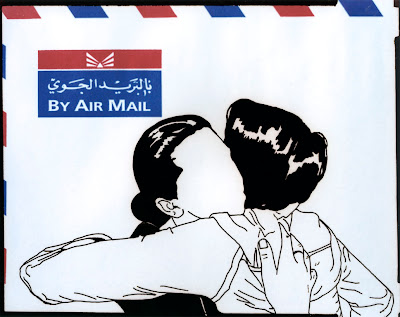 I only posted a single installation shot of Jowhara AlSaud's work (in my Paris Photo report) so here is a little more information to fill you in on another of the photographers who I'll be showing in my new exhibition.

Jowhara AlSaud is a 32 year old Saudi photographer whose photographs combine straight photography and what could almost be described as scrimshaw. She photographs an image that will become her ground and then elaborately and painstakingly carves traced images onto the negative using an array of tools. The foreground figures are all family and acquaintances sometimes photographed by Jowhara and sometimes using found photographs, but their facelessness is a commentary on censorship in Saudi Arabia and its relationship to visual communication.

I found the work immediately striking without knowing the full meaning, but I find this often happens with me. In my experience good work frequently communicates itself viscerally before revealing more subtle and complex meaning, and what appealed to me first was simply the resonance of the airmail border combined with the graphic illustration.

AlSaud explains the work and her intentions so well in her artist statement I'll let her speak for herself, but illustrated are the two prints we'll have up on the wall in our "The Year in Pictures" show. (They're worth clicking into to see larger.)

This body of work began as an exploration of censorship in Saudi Arabia and it's effects on visual communication. While there is a lack of consistency from region to region, overall, images are highly scrutinized and controlled. Some superficial examples of this would be skirts lengthened and sleeves crudely added with black markers in magazines or blurred out faces on billboards.

I tried to apply the language of the censors to my personal photographs. I began making line drawings, omitting faces and skin. Keeping only the essentials preserved the anonymity of my subjects. This allowed me to circumvent, and comment on, some of the cultural taboos associated with photography. Namely the stigma attached to bringing the “personal portrait”, commonly reserved for the private domestic space, into a public sphere.

It became a game of how much can you tell with how little. When reduced to sketches, the images achieved enough distance from the original photographs that neither subjects nor censors could find them objectionable. For me, they became autonomous, relatable, pared down narratives.

I've always been interested in how photography functions, and I try to undermine any documentary authority it may possess as a medium. I've always felt that a photograph functions more like a memory, in that it's a singular perspective of a split second in time, entirely subjective and hence impressionable. By etching these drawings back into film and printing them in a traditional darkroom, I'm trying to point out how malleable it is as a medium, even before digital manipulation became so advanced and accessible. With these interventions emerges a highly coded and self-reflexive language. What also interests me is that the information omitted (faces, skin and emulsion) creates an image of its own, as do the censors to our cultural landscape. 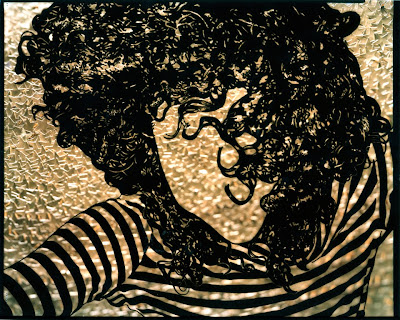 Posted by The Year in Pictures at 6:58 PM

These images are stunning.

I'm always surprised to discover artists who use barriers and limitations as inspiration, who use a barrier as a jumping off point for creativity. There's something about working within severe limitations that can lead to wonderful art. I suspect there are examples of this in all the arts.

So, she etches the negative, or uses digital editing software? Is this a series of "hard" changes to the "in the hand" negative, or soft changes, via Photoshop or other software.

I couldn't quite figure out from the posts, in conjunction with the images. I guess I'll need to go look her up and read more. Love the airmail image.

Your blog does that a lot to me--makes me go look further. This is good.

The way she talked about her work reminds me a lot about the book Lipstick Jihad; if you've never read it, it is about a lot of the same limitations of her culture through the press and what someone can and cannot document. I loved how she said, "It became a game of how much you can tell with how little." I defiantly can see the demonstration of censorship. I think its awesome as Joe Holmes said below me, that she used barriers and limitations as inspiration for her art. It defiantly gets me thinking about new inspirations for my own work. =]