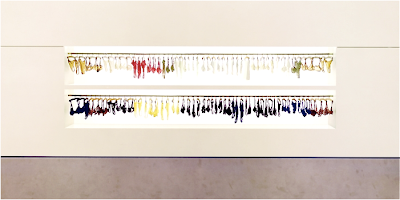 In the mid to late 1990s, Gursky turned his attention to the intersection of art and consumer culture with a series of huge color pictures of interior details of various Prada stores. Both Prada and Gursky were cresting waves of re-invention - Prada of its brand and Gursky of contemporary color photography - and the Gursky/Prada photographs are an observation and a commentary of the minimalist fetishism and artistic ambition of high fashion: underwear as expensive as jewelry being displayed like fine art in a store designed to look like a cutting edge museum.

At the time I didn't quite get the pictures - on one level they were a threat to the more classical school of photography I was associated with - but 10 years later, at which point they have already become period pieces, I think they're pretty impressive.

A few more Gursky Prada pictures below, but none as good to my mind as "Untitled IX":

i love these gursky works. #2 is my favourite.

a friend of mine owns one of gursky's arena / football field images. i'll never own one ... and that pisses me off ; )

Coincidentally, I was thinking of Gursky just the other day as I was standing outside my doctors office. It's on the 2nd floor overlooking a large grocery store - reminded me of the 99 cent shot. In this series, I think I'm most drawn to the coloured garments. I'd love to see it in person, next to his Chicago Board of Trade II. This one is so quiet, edited, maybe even pretentious ... against all the chaos, colour, and raw energy of the later Chicago shot. Inhale-exhale?? Either way - I like them all.