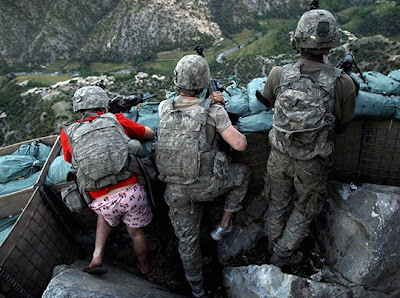 It may not be "Raising the Flag at Iwo Jima", but the picture above by David Guttenfelder makes an interesting addition to the history of war photographs - a genre we would of course be happy there were no more need for. Nevertheless it's a good picture of a real and courageous moment, so kudos to the photographer, who was embedded with the battalion.

Pictured here, soldiers from the U.S. Army First Battalion, 26th Infantry take defensive positions after receiving fire from Taliban snipers in the Korengal Valley of Afghanistan. Spc. Zachery Boyd was woken up by the gunfire and rushed from his bed to join his fellow platoon members without stopping to pull pants on over his "I ♥ NY" boxers.

As the picture made its way on to front pages around the U.S., Boyd was at first concerned he would be disciplined for being out of battle dress, but even Defense Secretary Robert Gates was moved to commend his courage. "The next time I visit Afghanistan, I want to meet Specialist Boyd and shake his hand." said Gates. "Any soldier who goes into battle against the Taliban in pink boxers and flip-flops has a special kind of courage!"

The soldiers next to Boyd are Spcs. Cecil Montgomery of Louisiana and Jordan Custer of Spokane, Wash. Spc. Custer is also out of battle dress with no socks and silver running shoes.

Posted by The Year in Pictures at 6:29 AM

Thank you for reminding us what today is really about. Not just an excuse for another sale at the mall.

Nice shot. I'm amused by the amount of media attention it's getting. I was in Khost last year and unexpected things happen all the time. It is gratifying to see realistic images of our troops in the press, depicting things as they really are, not as someone wants us to perceive them. Fitting photo for Memorial Day, thanks for posting it.
Different topic: Mr. Danziger, if you have any opinions on tilt-shift photography or the book After Photography by Fred Ritchin, I'd be interested in reading them.

After spending a year in Washington DC, Memorial Day means a lot more to me. I met one of the Original Rolling Thunder bikers (in his other life, he worked for the Library of Congress) and he shared with me pictures of was--, hoses, scrubbing brooms, suds and all--sprucing up the Wall for her big day.

Then to stand on the bridge just down from the Lincoln Memorial, feel the ground vibrate, see the many who come.

And later, finding photographs of brothers, fathers, sons placed along the Wall, along with all kinds of small treasures linked the two together.

I finished up that Memorial Day going to Arlington, seeing the flags, the tributes, the clusters of families.

I think the photo you've chosen is wonderful, and reminds us of that old fashioned term for this holiday: Decoration Day--honoring the departed, so many of them soldiers.

Great photo of courageous men and, yes, it surely does say alot. Nice to hear Secy Gates recognized that. Wonder if Cheney would have?