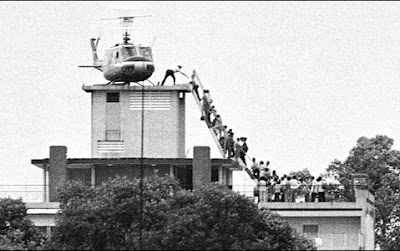 The Dutch photographer Hugh van Es, who died this week, became justly famous for this one picture of Americans leaving Saigon, on one of the last helicopters out, on 29 April 1975, the day before the city was captured by the North Vietnamese army. At the time he was working as a staff photographer for United Press International.

The simple futility of the mathematical equation - number of people in line ÷ space in helicopter - made this a symbolic picture then, while the composition of the curved line of desperately waiting people, the outstretched hand of the person trying to help, elevated it into one of those of photographs for all time. Extraordinary moment x elegant composition = iconic picture.

The photograph has usually been assumed to be of the US embassy, but in an article in The New York Times a few years ago, Van Es wrote: "If you looked north from the office balcony, towards the cathedral, about four blocks from us, on the corner of Tu Do and Gia Long, you could see a building called the Pittman Apartments, where we knew the CIA station chief and many of his officers lived. Several weeks earlier, the roof of the elevator shaft had been reinforced with steel plate so that it would be able to take the weight of a helicopter. A makeshift wooden ladder now ran from the lower roof to the top of the shaft. Around 2.30 in the afternoon, while I was working in the darkroom, I suddenly heard Bert Okuley [a UPI staffer who escaped that evening] shout 'Van Es, get out here, there's a chopper on that roof!'"

Van Es grabbed his camera and dashed to the balcony. "Looking at the Pittman Apartments," he said, "I could see 20 or 30 people on the roof, climbing the ladder to an American Huey helicopter. At the top of the ladder stood an American in civilian clothes, pulling people up and shoving them inside. Of course there was no possibility that all the people on the roof could get into the helicopter, and it took off with 12 or 14 on board ... Those left on the roof waited for hours, hoping for more helicopters to arrive. To no avail."

After shooting about 10 frames, Van Es went back to the darkroom and prepared a print for his regular 5pm transmission to Tokyo. It took about 12 minutes to send a single print with a caption but, as he laconically put it: "Editors didn't read captions carefully in those days." The picture was erroneously described as showing the embassy roof and, after years of trying to put the record straight, the photographer gave up. "Thus," he said later, "one of the best known images of the Vietnam war shows something other than what almost everyone thinks it does."

Thank you for recognizing Hugh van Es. Iconic indeed. If you lived through this period, this photo is pretty much seared into the unplesant memory bank (though we did all think it was the Embassy shot). You brought it out of the vault for much-needed reflection.

Thank you for bringing these memories back for people to enjoy. Great story and amazing picture.

As with most photojournalism, the backstory only enhances the image. Thanks.

What an amazing story, what an amazing photo. It reminds me, story wise, of the exhibit at the Newseum here in DC that showcases all of the Pulitzer Prize winning photographs, then tells the story (usually from the photographer's own words) behind each photo. Moving, memorable stuff. Thanks.

Just to add some interest to the story, check out this amazing LEGO version of the famous Van Es photo...