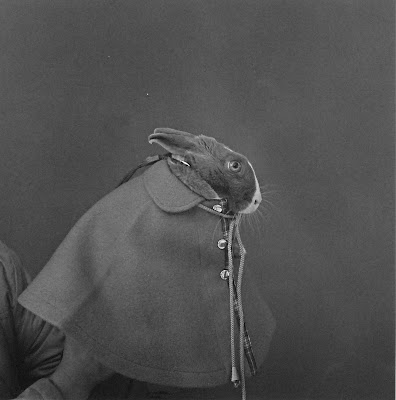 Sometimes it's just serendipity. I went over to 535 West 22nd to catch up with some of my favorite galleries and guess what? Bunnies!

First stop was the Yancey Richardson gallery where they were getting ready to hang their Hiroh Kikai show, opening later this week. I showed a couple of Kikai's pictures in my "Sander's Children" show and like many photo people was relatively new to the work of this Japanese photographer who has been making deadpan and slightly odd street portraits since the 1970s. You can read and see more about the show here. While it's not in any way typical, I really liked the picture above as well as its title. (All Kikai's titles have that slightly strange Japanese to English idiosyncrasy.) 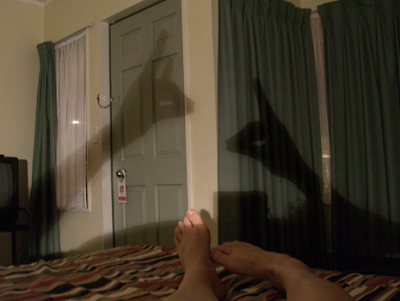 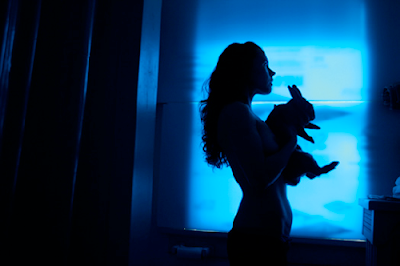 Next stop was Leslie Tonkonow and a new show of work by Laurel Nakadate. Mixing video and photography, I was particularly struck by
a pair of shadow pictures of which the above was one, as well as the coincidence of the bunny theme. There is also one extraordinary six minute video of the artist dancing in the desert to the strains of a Bruce Springsteen song. Beautifully filmed in the fading light of day, and with a sense that the artist is dancing herself into a trance, it has the visceral quality that makes good video/performance stand out from so much of the dreck that's foisted on us in the name of art. 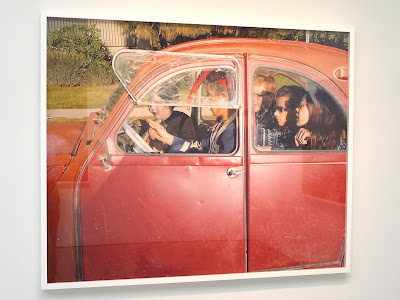 Sadly, no bunnies at Julie Saul where there is a strong new show of Andrew Bush's photos taken along Southern Californian highways in the 90s. I wrote about the work a while ago so you can read about it here.

And for a sneak preview of the Kikai show, here's a picture (below) of the work waiting to be hung. If you click on the picture you can just make out some of the images. 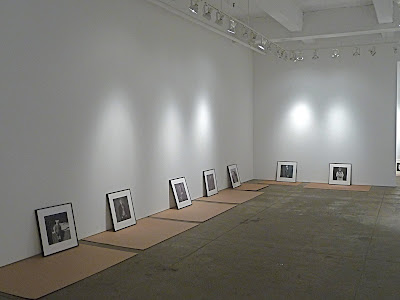 I love the Kikai photo! I first became familiar with his work when it was included in the exhibition "Heavy Light" at ICP a year ago. I still need to get the monograph "Persona" that ICP co-published with Steidl. There's something about his straightforward way of shooting, letting the subjects "speak" for themselves, that I really appreciate.

I also first found Hiroh Kikai via Heavy Light, and recently saw many more of his photos at a slide show & lecture given at Basho Gallery in Philadelphia.

I really want to see this exhibit....

Thank you for uour refreshing and inspiring blog : I like the way you wander in the city with the eyes wide-opened.. Do no ever get bored about this.. Because I would miss it !

Unrelated to bunnies, but: I caught the Andrew Bush show, and once again I was struck by how much more compelling prints are in person than the same images on the Web or even in print. It wasn't just the quality and size of the Bush prints, but also the immersion, being surrounded by nothing but prints everywhere you look.

I had the same reaction to your Paul Fusco exhibition last year -- seeing the prints in person was a completely different and very moving experience.

It reminds me how important it is to get out to the galleries.

Thanks for the interesting post. I like reading about (& seeing the photos) of current exhibitions. I'm also starting to enjoy the off-angle documentation shots of work under glass on gallery walls. I also like the final shot of work ready to hang.

Great little tour! I learned two things: 1) Hiroh Kikai and 2) the series that A. Bush made in the early 90s. It's interesting that J. Holmes mentions Paul Fusco in the above comment. This series actually reminds me somewhat of RFK Funeral Train. Even though taken of people by a photographer in a moving vehicle, they are also portraits of a landscape in time, typically American, and a little sad.

Bunnies are my FAVORITE! And I love your blog, too...

i LOVE the hiroh kikai above.

In love with the Nakadate photo. So whimsical.

BTW, in relation to the Andrew Bush vector portraits, 10 years or so back I was watching a TV documentary about how cars are designed, it was mostly about Lexus & Mazda, but there was a segment on Andrew Bush. He was interviewed & there was also some footage of him driving around working on this series that showed his camera rig. Sorry I can't remember the title of the show.

What a great idea! Love this.

Oh my god! That first picture is so fabulous!