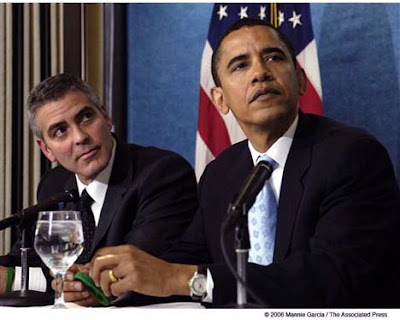 As you all know, earlier this week Associated Press accused Fairey of copyright infringement in using Mannie Garcia’s head and shoulders photograph of Barack Obama for his artwork.

Yesterday, Fairey filed a lawsuit asking a federal judge to declare that he is protected from copyright infringement claims in his use of a news photograph as the basis for his image of President Obama, and asserting a different photograph by Mannie Garcia was his reference. The lawsuit states:

The "Exhibit A" photograph submitted in the lawsuit is illustrated above. However, as you can see from the two overlays below, this is clearly an incorrect assertion. Why is Fairey saying this? It can only be that his defense would be stronger if he used a detail of a larger picture rather than an entire picture.

I have been an admirer of Shepard Fairey’s work but this is now trying my patience. I wish he could reciprocate with the generosity of spirit Mannie Garcia showed in his quote in today’s New York Times coverage of the story. From Randy Kennedy's story:

In a telephone interview on Monday, Mr. Garcia said he was unsure how he would proceed now that the matter had landed in court. But he said he was very happy when he found out that his photo was the source of the poster image and that he still is.

“I don’t condone people taking things, just because they can, off the Internet,” Mr. Garcia said. “But in this case I think it’s a very unique situation.”

He added, “If you put all the legal stuff away, I’m so proud of the photograph and that Fairey did what he did artistically with it, and the effect it’s had.” 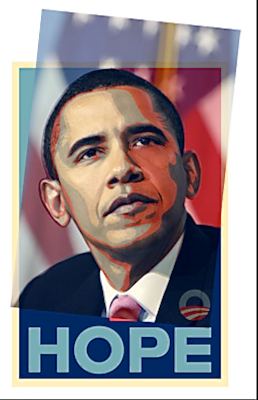 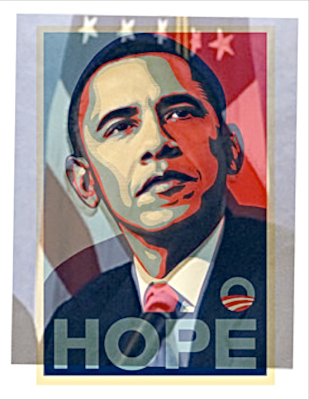 The photograph Fairey is now claiming he used overlaid on HOPE

Weeks ago, while discussing the Image on PBS' Fresh Air with Terry Gross, Shepard Fairey was asked if he wanted to give the the photographer a shout out, Fairey feigned ignorance as to the identity of the photographer saying only that the Image of Mr. Obama came "from the internet". Of course Ms. Gross had the information at hand and mentioned Mannie Garcia on air.
The tone of the exchange made Shepard Fairey seem petty and self promoting, not at all the sprint of the wonderful poster he created which helped unite so many of us.

hmmm...after this morning's pretty intense back and forth email exchange with fellow photographer robert wright re: the Fairey fair use issue and taking into account what seems to be Fairey's cavalier attitude about the whole thing, it seems that in this case the real problem might be his lack of generosity of spirit, not his appropriation of Garcia's image. Ironically, it's this same kind of "mine mine mine" attitude (greed) that Obama and his administration are combatting in Washington and on Wall Street. I don't think that this kind of pettiness is a very good match with Obama's notion of hope, change and progress...if anything, it seems like backpedalling...

Shepard Fairey is not known for his generosity of spirit. This is not the first time this sort of situation has come up for him.

I've got a different take on SF's claim that the poster is based on a different photo. I wonder if SF is setting up a claim that the various press conference photos are interchangeable and not unique, and thus fall under "thin copyright," which would mean they have no protection. I haven't heard anyone else suggest that motive yet...

I think Shepard Fairey should / must be protected from copyright infringement claims, even though he IS the peter max of our generation.

Did Fairey use Photoshop in the creation of his art? It looks like a literal tracing of the outlines of the original photograph. If his art is based on a digital file of the Garcia photo that he manipulated and posterized, that is a copyright violation of the sort that applies to computer code and digital typefaces.

On CBC this morning I heard that Mr. Fairey was recently arrested for his street art. Perhaps he has bigger problems now, and this suit will be dropped.

Maybe the AP suit & Fairey's countersuit is making him feel less generous. Or, at least, less vocal about it.

With Falzone & the Stanford Fair Use group as his lawyer...