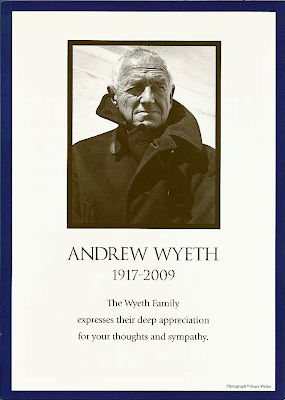 When Andrew Wyeth died last month, his work had slipped so far off the radar it was something of a surprise to find that he had lived that long. Nevertheless, Wyeth was both a popular and a great painter – two characteristics that do not always co-exist easily.

Throughout his career, Wyeth and the American modernist movement tried and failed to find common ground. The Museum of Modern Art even bought "Christina's World" in 1949, but Wyeth continued to be derided by the art establishment. I am sure time will now correct that situation.

In his home turf of Delaware, however, as with much of the rest of the country, he was revered. My sister-in-law (whose family were friends of the Wyeths) went to his memorial service last week and brought back this card, thinking I might enjoy it. (Apparently at the memorial service the photograph was blown up to epic size and had a stunning impact on all assembled.) Enjoy is hardly the word!

In addition to a long admiration for both Andrew and his son Jamie Wyeth’s work, this picture is one of my favorite Bruce Weber photographs. While Weber is best known as a fashion photographer, he is also a brilliant portraitist, particularly of artists. In this photograph he catches many of Wyeth’s characteristics with a visceral and elegant graphic punch – his orneriness, his patrician bearing, his iconoclastic status, his masculinity, his outsiderness in both senses of the word. It's one of those images that burns itself into your brain (and you can never look at a pea-coat again in quite the same way)! 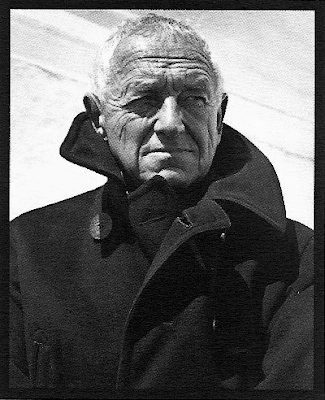 Posted by The Year in Pictures at 5:54 AM

I never had a strong reaction to his work before the big Wyeth retrospective at the Philadelphia Museum of Art a couple years ago.
I left with a whole new appreciation and respect.

That is an absolutely wonderful picture of an amazing man. May he Rest in Peace.

this is one of my favourite yip posts. you're spot on when you write he was a great painter. imho, i think he's one of the greatest american painters. i've had friends and colleagues roll their eyes when i've said that.

what an incredible portrait by bruce weber! more proof that you either have style or you don't.

ps for some reason i always think of the great canadian painter alex colville's work when i think of andrew wyeth's work. maybe it's the work ... or maybe it's their patrician bearing!

Please excuse this late catch but I feel I need to offer that although Wyeth's "home turf" may include Delaware his actual home, place of birth, studio as well as many of the landscapes and subjects he used in his work and museum sit very comfortably in Chadds Ford, Pennsylvania along the Brandywine River. Not Delaware. As a fellow Pennsylvanian I think Wyeth would agree with this slight correction.

On another note, as to your series of back views, I might add that Wyeth's most famous painting and his only painting in the Museum of Modern Art is
Christina's World which I'm sure you will remember is a complete "back view" in a landscape.