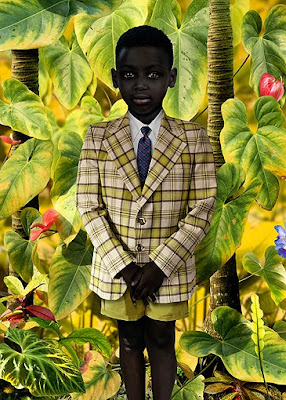 Sometimes when I don’t write about gallery shows it’s because nothing seems especially inspiring. However, the hope is always to find something that stands out, and I’m happy to say such a show is now up and running through mid-March at Stux Gallery on West 25th Street. The show is of recent work by Ruud van Empel – the 51 year old Dutch photographer who has been working in the collage/photoshop medium since the late 1990s.

For those familiar with the fine art photography world, there’s a strong similarity between van Empel and Loretta Lux’s work (digitally manipulated, slightly eerie looking pictures of children) but I believe van Empel’s work pre-dates Lux’s. In any case it’s definitely a step up in terms of scale, ambition, and execution.

Van Empel’s trademark pieces are Rousseau-like creations picturing (mostly) black children in the middle of vibrant jungle or verdant landscapes. Created and collaged and using photoshop, they are made up of hundreds of individual photographs so that every detail shimmers with life. The photographs of the children are slightly manipulated in a way that makes them appear fictional. Van Empel’s work imagines a world somewhere between children’s books, paintings, and science fiction.
Most importantly and appealingly to me - these pictures pack a powerhouse punch - visceral, catchy, fresh, large in size, and just beautiful as objects.

I understand that many people may feel a little queasy about the political correctness of such imagery, but looking at Van Empel’s pictures of both black and white children, there’s so much more visual oomph to the black subjects it’s easy to understand that the explanation is simply pictorial. Also the children are not so much pictured as unschooled natives but as sophisticated and elegant visitors to their edenic but strange environments.

Lastly Van Empel sees the children not as the other but as himself. Asked about the picture above, his explanation was as follows:

It is inspired on one of my own childhood photographs. When I was a kid I had to wear a suit with a tie and short trousers. I was supposed to look like a young gentleman but of course I only wanted to play wildly in the gardens and fields around our house. So it is funny to see a young boy all dressed up in a suit, and I translated this to dark children in tropical forest. In detail you can see a marking on his left knee, there is a little wound from playing to wildly but for the rest he is looking as a perfect example of a nice and good child. 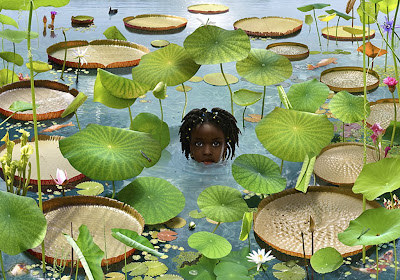 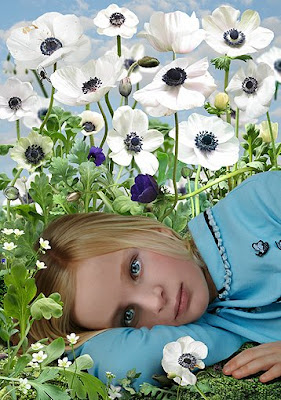 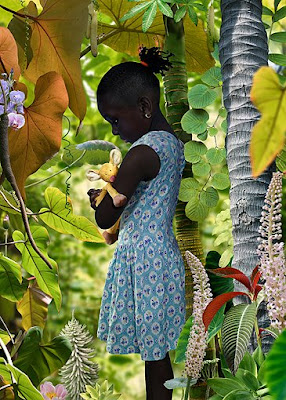 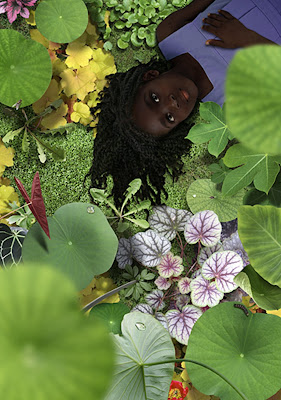 Posted by The Year in Pictures at 8:30 AM

WOW! Thanks for sharing. This is amazing stuff!

I'm a big fan of Lux's work, and I can see why you made the connection.

These are gorgeous -- in the screen images they seem maybe a bit more painterly (or illustrationly if that's a word) than Lux's. I can't wait to see these in person.

(Who would want art that made us queasy...?)

I love the pictures....so inspiring and full with hope for kids

have been a fan of his work for years. didn't know he had a show going on. thanks for the heads up.

I like his work and agree with you about its fresh visceral and ambitious nature - having recently seen more of it 'in the flesh' and in books at a recent fair, I was struck by the factory-esque way in which he harvests all the different 'digital' leaves and other elements to form an image library to draw upon in the creation of final images.

However, he frequently makes numerous versions of each specific image (same model, composition etc) with only slight variation that it often feels like he either can't decide on the best incarnation of a work or (more cynically perhaps) it's a way to increase output to keep up with market demand.

Although he does pre-date Loretta Lux, a few of his most recent pictures are in my opinion too much of a parallel to Lux:
www.stuxgallery.com/site/www/artist_gallery/26/439

I'm a big fan of his work. My favourite is:

I'm also a big fan of Lux and was a bit taken back by the "step up" comment, because I think Lux accomplishes what she intends to accomplish. I wasn’t going to say anything because to each his own, and I also very much like van Empel. But when I saw today's post -- with the backs of heads images -- I just have to point out Lux's "At the Window" -- no more, no less in that image, it's great.