Between 1964 and 1966, Andy Warhol shot nearly 500 Screen Tests, beautiful and revealing portraits of hundreds of different individuals, from the famous to the anonymous, all visitors to his studio, the Factory. Subjects were captured in stark relief lit by one strong keylight, and filmed by Warhol with his stationary 16mm Bolex camera on silent, black and white, 100-foot rolls of film. The resulting two-and-a-half-minute film reels were then screened in slow motion, resulting in a fascinating collection of four-minute masterpieces both startling and mesmerizing.

As with most of Warhol’s work you can see how influential the screen tests have become. It would be hard to count how many music videos and ads have taken off from these. For more than four decades it’s been difficult to see the films, but next month, Plexifilm are releasing "13 Most Beautiful...Songs for Andy Warhol's Screen Tests" a 60 minute film featuring 13 of the tests (including Nico, Lou Reed, Edie Sedgwick, and Dennis Hopper) along with a newly commissioned soundtrack by Dean Wareham and Britta Phillips. The musicians were picked by The Warhol Museum’s curators, one would imagine for their Velvet Underground style cool, but it’s an inspired choice that creates a timeless continuum for the first authorized DVD of Warhol’s seminal short films.

P.S.
With the limited edition you get to choose one of 13 prints including the one everyone will want - of Edie Sedgwick. 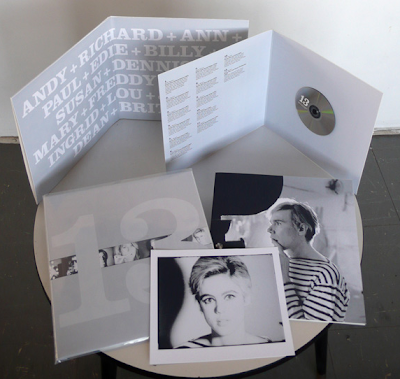 Posted by The Year in Pictures at 7:02 AM

Thanks for posting this.. Just placed my order!

ooh! this is incredible. thanks for mentioning it.