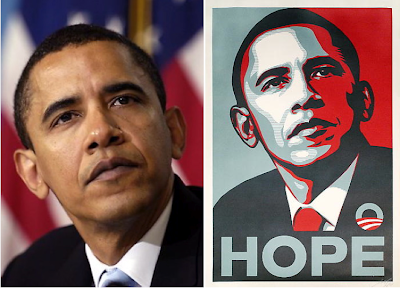 Once upon a time, not so long ago, I told you a story of HOPE. Now the story has hit the mainstream media, but in a highly uninformed and inaccurate way. A brief recap:

Over the last few months as I was preparing an exhibition on graphic art and photography inspired by Barack Obama I became interested in finding out the source image for Shepard Fairey’s HOPE poster. I felt that Fairey had created the iconic visual of the campaign and I was surprised that on a later and different poster he had credited my friend David Turnley, but on the earlier VOTE (and PROGRESS) posters Fairey had only said that it was an image found via a Google image search. It seemed ungenerous although not illegal (based on my understanding of copyright law).

There are two key issues in copyright cases – first is the work transformative? And secondly does the “borrowing” of the image cause financial harm to the borrowed party?

However, first I had to find out who took the photograph Fairey’s work was based on. A call out on this blog led to one mistaken identity, followed by a correct one where it was indisputably proven that Mannie Garcia, a photographer working for Associated Press (AP), had taken the picture Fairey had copied in 2006. (That was why it was so hard to track down. A Google image search of “Barack Obama” yielded thousands of pages of thumbnails whereas a search of “Barack Obama 2006” brought up the picture in the first 20 pages.)

I contacted Mannie Garcia and AP proposing we edition the print and include it in the show and after two weeks of deliberation AP and I came to terms on how we could sell the print. Under the terms of AP’s contract with Garcia, they claim sole copyright of the image and I wanted to make sure it was a fair arrangement where Garcia would benefit. (Now, even the Garcia/AP arrangement is under some dispute. However, it should be noted that Garcia who is a Buddhist says he plans to donate most of his proceeds to charity.)

In my conversations with AP (and Garcia) I gave them my opinion that based on legal precedent, this was going to be a difficult case for them to win. First, the work is transformative; and secondly, rather than causing financial harm to the copyright holder, the usage and publicity has actually caused financial gain to the copyright holder. As of now, we have sold 18 prints including two to museums.

Then yesterday AP alleged copyright infringement and issued the following statement: "The Associated Press has determined that the photograph used in the poster is an AP photo and that its use required permission," said the AP's director of media relations, Paul Colford. "AP safeguards its assets and looks at these events on a case-by-case basis. We have reached out to Mr. Fairey's attorney and are in discussions. We hope for an amicable solution."

Fairey’s lawyer, Anthony Falzone’s response was: "We believe fair use protects Shepard's right to do what he did here. It wouldn't be appropriate to comment beyond that at this time because we are in discussions about this with the AP."

My feeling was that while Fairey might have had a legal right to “borrow” the image, it was inappropriate to not credit or reveal the source. Additionally, as the work was originally created by Fairey as an Obama benefit, it seems even more inappropriate to take advantage of the little guy in this case - Mannie Garcia.

My position was always that this was a situation that should be settled Solomonically. My suggestion - AP and Garcia should trade two signed prints to Fairey for two unique signed works (one for each) using the Garcia Obama image. (These should be handmade works of some value such as Fairey produces for his galleries as opposed to just signed posters.) And then everyone can live happily ever after in this highly litigious world.

I'll give the last word (for now) to Mannie Garcia: "This is not about me making money off this, it's about recognition. I made the most iconic image of our time, and I'd like it to make a difference, not make me money. I'm a blue collar photographer - I am out there on the grind every day. I spend more energy looking for work than doing work. I just want Shepard Fairey to say "Alright, you're the guy. Thank you.".

"Highly Litigious World".... sums it all up right there.

This story has been fascinating to follow.... but I just end up shaking my head.

The best overview I've seen of the legal issues in this case is in this blog entry by attorney Carolyn E. Wright.

I'd argue that it wasn't Mannie Garcia who "made the most iconic image of our time", but Shepherd Fairey.

the photographer didn't make the iconic image! Shepard Fairey made it! He used some ingredients from others, and for that he should credit the Garcia, but he is the one that made the iconic picture!

I agree. It was phrased inelegantly.

It's not that I'm not sympathetic to the photographer or any other original artist.

I think Fairey now knows he's working in a world wider than the street & the art world and will take better care in the future. He just didn't imagine how far this image would go. He (or his commercial clients) probably already deals with copyright issues when working on commercial projects.

Your approach to this current dilemma is a wise one, I think, but AP probably wants to make a point.

First there was Andre the Giant image with his "Andre has a Posse" stickers.

Then there was the Movie "They Live" where he stole (which he has admitted in the past but hasn't in the last few years) the whole idea for the "Obey" campaign.
The movie is on google video at this link:
http://video.google.com/videoplay?docid=-9005367754264973286

This is the complete movie. I couldn't believe it.

It's sampling but I don't think he cares to admit that any more. It is what it is.

When you sample a Grandmaster Flash loop you have to pay for it and credit him. What's the difference here?

I think I've read that your gallery is now associated with Fairey. That said, his "art" is tenusous at best, his creative etiquette is embarrassing and worst of all his passion is transparent.

I have genuine admiration for Shepard Fairey's work and have several of his Obama prints in my current exhibition. I do not, however, represent him. His New York dealer is Jonathan Levine.

Neither works are that great, the photo is just one of hundreds like it. The poster was made popular by Obamas campaign and organizations like MoveOn.org. In the end both photographer and artist have benefitted from the other.

Separately, I find Fairey's work similar to many designers out there. They all lift images freely with no thought to the original author or to being original themselves, lazy creativity at best. It just reconfirms the fact that much creative success relies on promotion and timing vs. idea or skill.