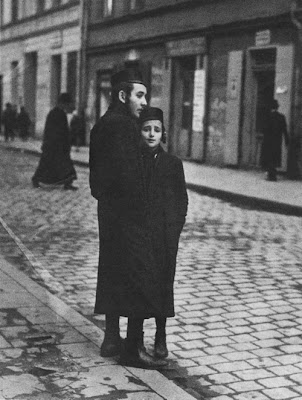 When I sit down and open a magazine or newspaper, there's always the hope that some unexpected gem of a picture will pop out.

This anonymous picture, taken in the Warsaw ghetto in 1941 just appeared in the New York Times book review section and I think it would be hard to find a more powerful image. The expressions of the man and boy, their clothing, the unusual composition of the figures in relation to each other as well as to the receding street and the figures behind them combine with our premonition of their fate.

How did the photographer manage to take this picture? What did he say to the subjects? They’ve obviously consented to be photographed but they seem far away from the experience.

The picture uses a compositional device that four of my favorite photographers - August Sander, Richard Avedon, Alex Soth, and now - The Sartorialist – often use, viewing the full figure but from a distance, the subject weighted towards the bottom, often against a diagonally receding ground. Is it just me or does it seem to work every time?