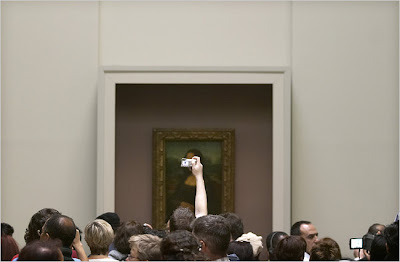 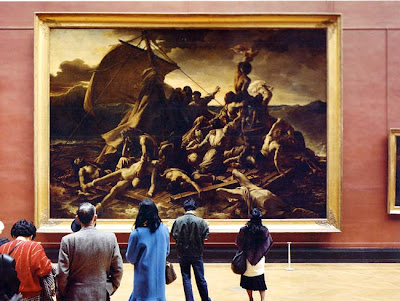 Two pictures of the Louvre. The first appeared in the New York Times illustrating an article about how the Sarkozy government is considering making all museum entries free. The photographer, who I have not previously heard of, is Ed Alcock. The second is from Thomas Struth's famous museum series. I like them both in different ways - the Struth because it is so deliberately and thoughtfully conceived, and the Alcock because it is unwittingly artful.

With MoMA admission now infamously at $20, the free admission idea seems timely and is already working in England where there has been a 50 percent rise in attendance recorded since the measure was introduced in 2001. An intelligent alternative is the Metropolitan Museum's where there is a "suggested donation" of $20, but you can pay nothing if you wish.

An even better idea for improving the quality of American museums - get the curators and directors out of their chairs and offices and into the streets, galleries, studios, and schools. There was a time when the photography directors of the New York museums would regularly come to galleries, but this is now a rarity and all are the poorer for it.

Posted by The Year in Pictures at 2:46 PM

Shortly after posting the above, I opened the New York Times to read Martha Schwendener's review of MoMA's current and disappointing "New Photography" exhibition. Schwendener concludes "... so far (MoMA) has been weak in showcasing new developments and contextualizing contemporary photography within the collection, which helps explain the jarring transition from Stieglitz & Company to the current crop. You hate to be the spoiler, the insatiable art viewer constantly demanding that rush of something new. But when a show is called “New Photography 2007,” you feel within your rights."

I appreciate your post but judging from Ed Alcock's award winning career and website his work is anything but "unwittingly artful."

Unwitting would be if he was just a tourist passing through the museum and happened to snap that photo.

I appreciate your point. My point was that while one had journalistic intent and the other "artistic", they were equally strong pictures. I was trying to give Alcock kudos.

I realize that you were complimenting the Alcock photo by making the comparison but calling it "unwittingly artful" implies that the photographer had no clue he was making an artistic picture.

My argument is that he certainly knew just as much as Struth knew. I think it's obvious that Alcock had both journalistic and artistic intent in mind.