I'm always surprised that the greatest hits of photography still make it into every auction sale and continue to fetch record prices - one would think there would be a law of diminishing returns. But at least this mentality offers the more adventurous collector a great opportunity to pick up bargains. The nice thing about the auction catalogs that come to me regularly (from both the well-known auction houses and places I've never heard of) is the inexhaustible supply of fresh images. The photographs below come from the Bassenge Auction to be held in Berlin on December 5. 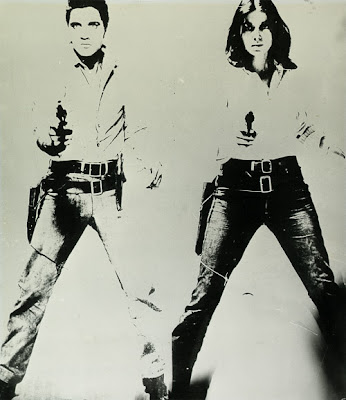 The image above is by Ulrike Rosenbach - one of Joseph Beuys' star pupils in the late sixties. Titled "Art is a Criminal Action" it was made in 1972 and consists of Rosenbach's image copied on to Warhol's "Double Elvis". An early appropriation work with Dada and feminist subtexts, it packs quite a punch. (Estimate - $5760) 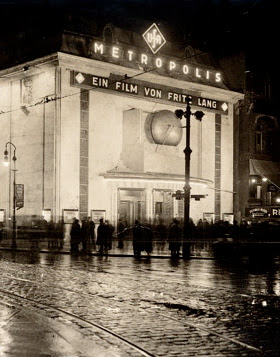 This image by Alex Stocker was taken at the 1927 premiere of Fritz Lang's "Metropolis" at the Ufa Pavilion in Berlin. The film was the most expensive film made at the time and this photograph exudes a sense of the excitement and drama of opening night. While "Metropolis" is acknowledged today as one of the great masterpieces of cinema, it turned out to be a critical and financial flop, driving its film company to financial ruin. (Estimate - $1,700) Last is this 1956 portrait of the young Steve McQueen by Roy Schatt. Schatt studied painting with N.C. Wyeth, before moving to Greenwich Village, becoming an actor and then a photographer. Seeking the unguarded, emotional moment, Schatt defined himself as a "method" photographer - and his connection to the changes sweeping through theater and film were confirmed when Lee Strasberg named Schatt the official photographer of the Actor's Studio. (Estimate - $1,400)

Posted by The Year in Pictures at 3:40 PM