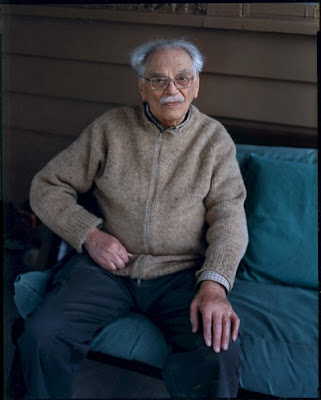 Sometimes life gets in the way of the art. This is one of the few plausible explanations of why Milton Rogovin, who turns 100 today, is not more widely know or celebrated than he is. I have been lucky enough to represent Milton’s work for the last few years and have put up a show that re-opens next week and runs through January 16. If you don’t get a chance to see it in person, I hope you’ll check out all the pictures on the Danziger Projects website. (Click here to view.) Hopefully you’ll see why he’s such a photographer’s photographer – a particular favorite of Alec Soth and Tanyth Berkeley amongst many others.

This is not to say Rogovin is unknown. In 2007 he received ICP’s prestigious Cornell Capa Award and his work is in the collection of most major museums, but it would be fair to say he’s not a household name.

Still healthy at 100 years old, Milton is celebrating his birthday with friends and family in Buffalo. So let’s salute an artist without artifice, a democrat of the darkroom.

Posted by The Year in Pictures at 8:41 PM

I am so glad to hear that Mr. Rogovin is still going strong at 100. His work is so strong; it's a shame he's so under-appreciated.

Thank you for posting about this important milestone in photography, and Happy Birthday Mr. Rogovin!

The Center for Creative Photography is proud to announce that we just received a huge donation of Milton Rogovin prints. We'll be featuring just a few in an exhibition at the Phoenix Art Museum called Exposing Time that opens March 6, 2010.

I went to the exposing time exhibit at Phoenix Art Museum. It is a really great exhibit; I might try to go back before it ends, late June, because I truly enjoyed it. Plus it was my first time seeing some of the photographers work and now I'm in love.