Send in the Clones 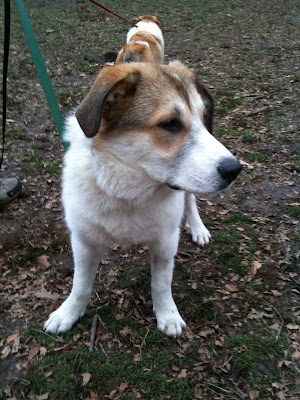 After my experience last week of nearly touching the moon (or at least a piece of moon rock) I had almost given up on the chance to touch a miracle - when a woman in the park told me about a pair of cloned puppies who occasionally showed up in Central Park in the spot where our dog, Jenny, sometimes runs off the leash. A couple of days later, the dogs appeared, and while they were not very co-operative in posing together, they were indeed quite miraculous. A nearly identical pair of female twins (clones can only be the same sex) they were normal in every way, although according to their dog walker (below) they acted somewhat older than their age of 6 months.

I did, of course, pet them - reflecting on the many things that have occurred during the last few years that have changed our life in both small and large ways. I don't mind the idea of cloning beloved pets. There are not many medical, technological, or scientific breakthroughs that I have a problem with. But I'm still thinking about what the change from analog to digital photography means to us. What's worse? The drawers stuffed full of old snapshots or the outdated computers with pictures that have not been transferred or stored properly? What's better? The carefully assembled family album, or the beautifully organized iPhoto library? What do you think? 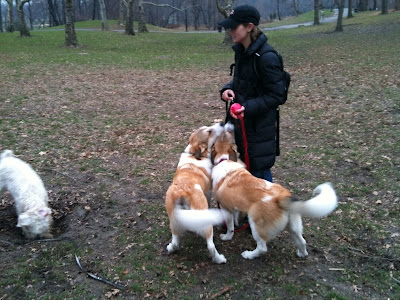 Posted by The Year in Pictures at 9:00 PM

I will admit that given the chance I would clone our dog Gus. He's only 4 and life expectancy for his breed is about 14 and I already have nightmares about life without him.
It's pathetic.

But the "This American Life" episode about a bull, Chance, who gets cloned, Second Chance, and how different (nasty) the clone ends up being gives me pause.

All that said, photo albums are better- but iphoto is sure handy for making them.

Handwriting has the "personal touch", but can also be illegible. Type can be impersonal but is indispensable for uniformity and in some senses, universality.

For me the difference between analog and digital is about the collapse of space-time. With analog there is the possibility of an original, a one off, a tactile object, in your hand or drawer. It sits in one place at one time and if there is a reproduction, it can never be the exact same. But with digital there becomes no original and the image can exist pan-optically and instantaneously. It can literally be everywhere at once and the original O/I code can be duplicated exactly. What does this do to the power of the image or how it’s presented? It got me worried that the power of the photograph would start to delineate or equalize. Photography would render its own potency obsolete.

But then my friend said this odd thing to me. He was talking about his move away from digital photography (which he had done with great skill), which was inspired by the work of Olafur Eliasson. He said that the contemporary photograph was not enough anymore and didn’t activate a space the way installation could. His new pieces would be a return to making more installations and experiential work. He was mostly inspired by the image of The Weather Project by Eliasson. I realized his flaw quickly however. He had never seen the installation in person. He had only seen the image. So, it was actually a photograph that had motivated his whole change in thinking away from photographs. He had clearly illustrated the power of that image.

It got me thinking… was it really necessary for Olafur to actually make the installation? This harkened back to something I suggested about Chris Burden’s work years ago. With both artists, it becomes less about the experience, but instead about the documentation of it. In this sense, the original experience never needed to happen. Burden never needed to be shot; he only needed to convince us that he could be shot. The same is true with Eliasson. So, this means that as long as the artist has credibility with a few original pieces, they no longer need to make work, only documentation of it. This is perfectly in tune with a digital era and could be the new pursuit of digital photography and something that couldn’t be clearly done with analog… at least not in a high def world. Also, in the spirit of digital work, there would again be no original. It would be an art of documenting the best ideas, not the best objects or experiences. A virtual art.

The good news is that in Olafur’s case it would be a lot less expensive and in Burden’s case a lot less painful!

We have half a dozen physical albums full of snapshots from previous decades, and we also have thousands of photos in Aperture and iPhoto for computer slideshows. But we're trying something new this year.

We're gathering all the memorable family photos from 2009 -- about 100 -- and having them printed in a single iPhoto book. It seems like a nearly ideal compromise. We've really missed having a physical book to pull off the shelf and gather around, or carry to the grandparents -- or better yet, ship to the grandparents for them to keep.

The quality isn't as good as real snapshots, but it's certainly good enough, and if you want excellent quality, you can spend more time and money and order a book from Adorama, which is made as digital C prints on photo paper.

(As for the change from analog to digital, that's a whole 'nother enormous topic...)

Actually, cloning animals is incredibly risky for the animals. Lots of birth defects. Lots of fetuses that don't make it to birth. Not a good idea.

I really enjoy the immediacy and convenience of my digital point-and-shoot, using it as a sort of sketchbook by snapping photos of anything and everything. I like that I don't have to worry about "wasting" film on silly shots too.

But I also very terribly miss shooting with my film SLR and being excited to see what was on the film when I pulled it out of the developing tank. I loved spending so much time in the darkroom, perfecting my prints in both color and B&W. The quality --and I mean the feeling, not the caliber-- of prints from film negatives is so distinct and cannot to my mind be replicated with a digital image.

It saddens me when I think of technologies such as dye transfer, Polaroid, and now film, that are becoming niche interests that only true fans will help keep alive. But I guess it is the way of the world to always move "forward".

It seems that one consequence of digital photography is a renewed interest in the print. The physical presence of a print is quite something, and the older technologies are being wed to the new in interesting ways. Being able to quickly and easily generate contact negatives in Photoshop and print them using desktop printers is bringing a lot of people back to exploring some of the legacy printing techniques of the 19th and 20th centuries.

Also, as the previous commenter pointed out, it's now easy to make a Blurb or an iPhoto book, which seem to be taking the place of the old photo album.

Photography as a technology has been becoming more accessible since nearly its conception. Now, it's almost as easy to pick up a camera as it is a pencil. But I think we will continue to see the rare instances of artists (not to be confused with MFAs) using photography to make good art.

For the possibilities of cloning, there is no better novel than Michel Houellebecq's The Possibility of an Island. Tada.

The ironic thing is, the longer I shoot digital, the more I shoot like I did (for more than 20 years) with film -- these days I'm shooting fewer frames, I tend to wait to review the images, I no longer crop, etc...

But without the freedom to experiment that digital gave me a few years ago, I think I'd still be shooting mediocre snapshots.

...and I highly recommend Kazuo Ishiguro's odd and haunting novel "Never Let Me Go" for another take on cloning...