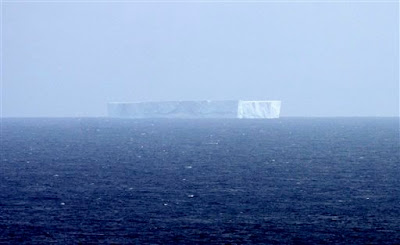 Looking more like a work of earth art or a cross between a Lynn Davis and a Sugimoto than a natural phenomenon, this large iceberg was recently spotted about halfway between Antarctica and Australia, a rare sight in waters so far north.

Australian Antarctic Division researchers working on Macquarie Island, about 930 miles southeast of Tasmania, first saw the iceberg last Thursday about 5 miles off the northwest coast of the island. The iceberg, about 160 feet high and 1,640 feet long, is probably part of one of several larger icebergs that broke off Antarctica's Ross Ice Shelf between 2000 and 2002.

Scientists believe the iceberg will break up and melt rapidly as it continues its journey north. So get moving if you're interested in this particular photo-op! 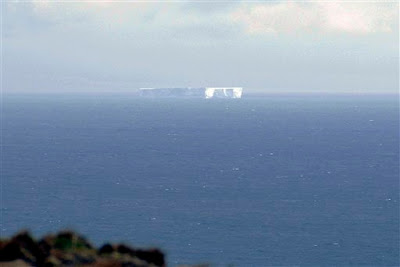 The iceberg as seen from Macquarie Island.

Posted by The Year in Pictures at 9:20 PM

Incredible! It looks so surreal.

wow. it may be one of the most beautiful photos I have ever seen. it has it all. it is imedeately arresting, even kind of scary and unsettling just because it is square and so opposite our expectations of an iceber. it is absolutely formally beautiful in line and color and its is filled with loss and tragedy as you know that that ancient water melting spells doom yet it remains absolutely serene and peaceful. i can't stop staring at it.

Amazing- I wish I could see it! I have a penchant for ice.