A Man and A Woman 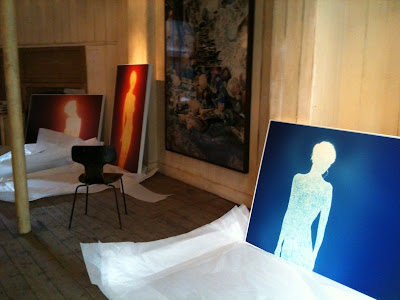 One recent comment to this blog asked how I decide what to buy at a fair like Paris Photo or indeed anywhere. The easy answer and the one that I usually give new collectors is to wait until you see a piece that you feel you can’t live without. If you walked away and someone else got it, it would break your heart. (Trust me - my heart has been broken this way many times.) Of course economics plays a part in this. You can't always get what you want - only what you can afford.

But thinking about the above in the context of my own collecting and the recent fair and my trip to London, I realized there’s more to it than that. The other piece of advice I give collectors is equally if not more important. That is to spend as much time as possible looking and not buying. Going to galleries, museums, and auctions; reading reviews; immersing yourself as much as possible in the medium because every intelligent decision is a combination of knowledge, reflection, and gut reaction.

The two pieces I bought this week both built on past knowledge. The first piece (pictured above and below) was a cameraless photograph by the British photographer/artist Christopher Bucklow. It’s made by a complicated process where a person’s shadow is first silhouetted on a piece of foil. The foil is then transferred to a box where it sits on top of a sheet of photographic paper. The figure is then laboriously recreated by making thousands of pricks of light in the foil. The earlier the hole is made, the brighter the spot so Bucklow is fully in control of the glow that emanates from these spectral figures. I’ve been a big fan of Bucklow’s action/process photograms since he first started making them and also enjoy keeping up with the vitality and energy of contemporary British photography. So this was the background to the purchase.

One further contribution was that there was a Harper’s Bazaar in my hotel room which had a feature on Claudia Schiffer where they had asked various artists to photograph her – one of whom was Christopher Bucklow! I knew from my correspondence with Chris that he had a show opening in London the week after my trip that I was sadly going to miss, but I hadn't know anything about the Schiffer pictures. (It always pays to read.)

So here’s the kicker. As usually happens at the end of a foreign trip, I was trying to get home early and because of the incompetence of a particular Virgin Airways desk person I missed getting on the morning flight to New York and found myself at Heathrow Airport on Friday morning with three and a half hours to kill before boarding the 4:00 p.m. to Newark. So I hightailed it back into London with the hope of getting a sneak preview of Chris’s new work at Riflemaker Gallery before they installed it. I called from the train and Robin Mann, the gallery director, was friendly and co-operative which is how I found myself face to face with a choice of one of three photogram silhouettes of Claudia Schiffer. I picked the orange-y vertical because I liked the way the figure filled the frame and the outline of her breast, although the blue horizontal was a close call.

So that’s how I happened to buy picture #1! 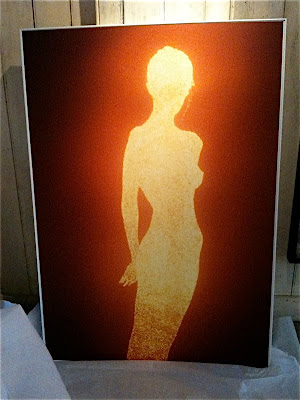 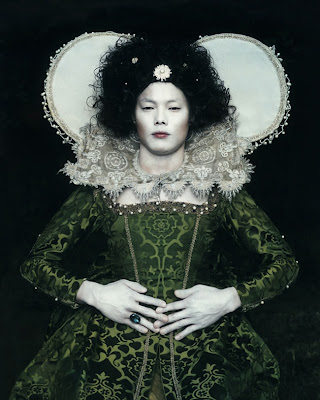 Picture #2 was this costumed self-portrait by the young London based Korean photographer Chan-Hyo Bae. It was a picture I had seen previously on the website of Purdy-Hicks, the London gallery representing my friends Susan Derges and Tessa Traeger. I had been struck by it on the web – I liked its fidelity to the conventions of Elizabethan portraiture combined with its play on gender, race, and medium – but I hadn’t seen it in person. P-H had a print on the wall at Paris Photo that lived up to my expectations and voila! Purchase #2.

Thank you for the informative and affirming blog post about how you add to your collection. I was glad to hear you say how beneficial it is to study and re-study your reaction to a photo. I definitely feel more empowered to make solid decisions!

Wow, I love that Chan-Hyo Bae! Look at those hands. Definitely a print I could live with.

Well, I guess I have attended Paris Photo 09 vicariously through many of the blogs to which I subscribe. James, you must have an extraordinary amount of energy, judging from the description this young man posted of his first experience at Paris Photo:

It's a good read (and I am not affiliated with his blog in any way; as I said, I live vicariously).