No Fear of Flying 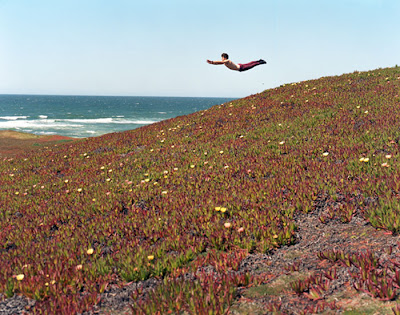 Daniel Gordon is having his moment. A 2005 Yale MFA grad, Gordon’s photographed sculptural collages (see first image below) are one of six groups of work featured in MoMA’s current “New Photography” show which addresses the concept of image collection and creation in the studio or darkroom. I have to say I’m not crazy about these pictures. (They’re a little too violent for me.) But this past Saturday I just managed to catch the last day of Gordon’s exhibition at Leo Koenig – a sampling of a much earlier project of “flying” pictures - which I really liked a lot.

A group of self-portraits taken starting ten years ago in the Hudson Valley and the Bay Area, the extremely athletic artist recorded himself flying — if only for 1/125th of a second at a time. The images are both landscapes and performance documents, humorous and surreal, playing with the notion of how photography can deceive and enchant.

What was particularly refreshing was to see something that was new and gutsy both conceptually and physically. The laws of physics mean that he does after all have to crash. But how nice to see something vibrant and life-affirming and unexpected. 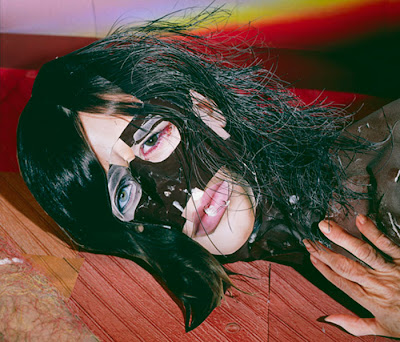 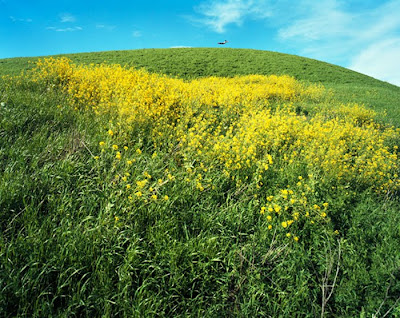 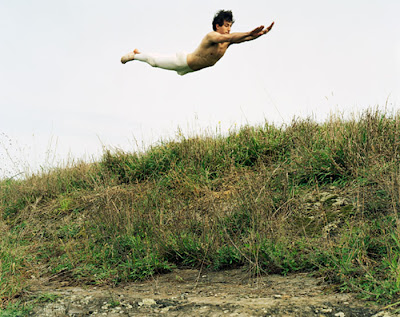 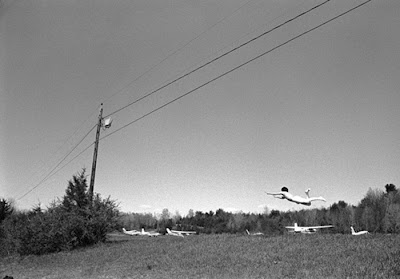 Posted by The Year in Pictures at 7:13 PM

Are you famililar, James, with the images by this French photographer?

Normally I hate collages -- bad memories of elementary school projects, I suppose. But Gordon's collages were way more impressive in person than I expected. I don't love them, can't even say I like them, but I can see that he's onto something powerful.

I think I see some editorial work around the corner for Daniel Gordon. Can't you just see the Microsoft Logo sitting ever-so-comfortably at the bottom of the 2nd ultra green grass and bluer than blue sky flying image?

I had seen Darzacq's pictures, and I think they're good, but Gordon's pre-date them. I prefer Gordon's because they're more personal and romantic and less urban. (Darzacq used break dancers.) But thanks for the link. Well worth seeing and a case of two photographers who I'm sure were totally unaware of each other's work.

I'm in agreement with your take on this photographer's development. The photographed sculptural collages, well, they seem to result fromt the kind of "idea" that Claire Fisher had in "Six Feet Under." So often, when I look at art, I see career choices, rather than personal choices.

ps I just had a look at dh's link to Denis Darzacq. Nice work! It hits the spot.

...picture Christopher Reeve as Superman in low level flight comming around the hill... :-)

Did you also happen to highlight a female artist who jumped or also "flew"? I could be completely mistaken and unfortunately her name completely escapes me!

I like this almost as well as I like Barry Flanagan's hares in mid-leap from, I think, the 1990s. I will return to these images, the same way I return to the hare at the Walker every time I am in Minneapolis.

oh! i loved this fly!