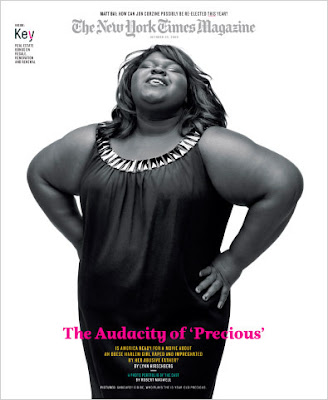 Just over five years ago, the photographer Robert Maxwell began doing a series of portraits for The New York Times Magazine called “The Originals”. The idea was to highlight creative individualists who all had a certain style and the series jumped out of the gate at a high level and has been cruising along up there ever since. Maxwell’s pictures don’t try to knock you over the head with gimmicks or surprises. He’s more of a traditionalist, but lately his classicism has reached a new depth. He’s still absorbed with surface but it’s now balanced with an equal interest in what’s beneath. I don’t think I’ve ever seen a photographer looking so deeply into people’s eyes both literally and figuratively.

This past weekend’s portfolio on the stars of the film “Precious” is a great example. But in particular I would draw your attention to the two pictures of the movie’s star, Gabourey Sidibe – one on the cover and one inside. What stands out for me is the amazing dignity and presence with which he has photographed someone who is so overweight. I’m not an apologist for obesity, but at a time where issues of weight, health, and body image, are being hotly debated – these pictures present an interesting and artful talking point. 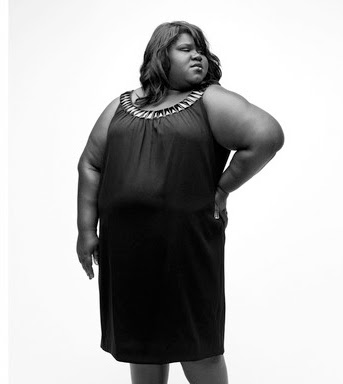 Posted by The Year in Pictures at 6:34 AM

Agreed. How rare is it to see this much skin on one who is less than toned or fit? Sure, we like to look at athletes or other society-approved-as 'beautiful' people but seeing this actor's bare arms somehow feels like a lot of skin. I like it.

I also love the light on her skin - beautiful.

Not an apologist for obesity? There is less intent in someone who is hugely fat than someone who drinks daily, or smokes. It is something about the person, not who they are. I think the shame is people see a conflict within someone who is overweight having presence and dignity.

Weight is a number, NOT intelligence, pride, kindness, dignity, and fortitude. It is unfair, and fallacious to assume there is any correlation.

A decade back (or so) they asked a bunch of 1 grades if they would rather be fat or have one arm. Almost all of them chose one arm.

I agree, these images show a woman that seems very proud to be in her own skin. Skinny or overweight, its nice to see a woman who portrays confidence.

Kudos to the mag for putting Sidibe on the cover...and to Maxwell for showing her as she is - sans artifice, no smoke or mirrors - and letting her light shine through. She's a fantastic actress.

Absolutely agree. I love the second choice...there is something deep in that picture.

She seems more proud than the frustrated dolls we see in glossy sheets, end of the day kudos to the one who was fortunate enough to capture the essence.