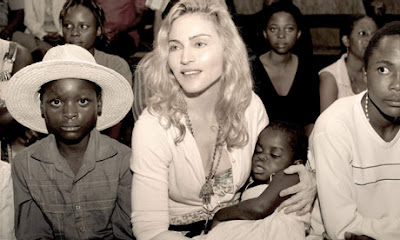 Madonna holds the child named Mercy, whom she hopes to adopt, in an undated sepia publicity photo taken in Malawi.

From England's Guardian newspaper, this incisive commentary from photographer Martin Parr on the above photograph - a handout from Madonna's publicists distributed to the world press via Reuters:

Madonna has released an image of herself holding Mercy, the Malawian baby she hopes to adopt. It's in sepia. Why?

Choosing sepia is all to do with trying to make the image look romantic and idealistic. It's sort of a soft version of propaganda. Remember when the colour supplements used to run black-and-white pictures of famine and hardship? Some still do. They do that because they want to make it look more authentic. But it's a fabrication. You can't shoot in sepia, so converting into black and white and then into brown makes everything feel less real.

Madonna is a clever person and this image is all part of a rigorous attempt to persuade the Malawian courts that her adoption should be allowed to go ahead.

As well as the photo being sepia, there appears to be a subtle soft pink hue on Madonna herself. I guess this is the colour of reassuring, concerned maternity. You can imagine Madonna and her team thinking this through in the same way an advertising campaign is orchestrated.

This predilection for sepia is all part of the baggage we have aboutphotography. Despite all the above people seem to think it looks more real. Only 30 years ago, if you were a serious photographer, part of the art world, you had to work in black and white. You were almost scorned as commercial if you shot only in colour. When I first started doing colour in 1982/83 there had only been one serious exhibition in colour in England (that was Peter Mitchell at the Impressions gallery in York in 1979, with an exhibition entitled A New Refutation of the Viking IV Space Mission). It was a scandal in the world of photography. But it convinced me that colour wasn't the domain of the commercial and snapshot photographer.

Some, however, still harbour the notion of a black and white humanist photographer. Sepia in particular tends to make everything look a bit romantic and almost sentimental, hence the fact that it remains such a popular choice for wedding photographs.

It suggests old values, and in our days of modernisation, we hanker after that.

Posted by The Year in Pictures at 6:49 AM

Wasn't Eggleston's show at MOMA important, or do things in the colonies not count?

I thought Eggleston at MOMA in 1976 was the ground-breaking color exhibition that turned the field on its ear. (And Googling around, I also discover that Ernst Haas claims the first major color solo photo show, in 1962 also at MOMA...)

Whatever. Parr's analysis of the Madonna photo is intriguing -- though Madonna might help the cause by exposing a little less cleavage.

Thank you so much for this. Great post. your very right about the madonna photo. Interesting indeed!

Back when I was in advertising, we'd call this the "smiling white person" shot.

This is well-traveled territory with a person who has manipulated their entire persona for effect.

I agree that anything Ms Ciccone (ooh, suppose I just dated myself with that) does is ever random.

I find the publicity angle on this somehow not quite right. I can't articulate it either. It just doesn't sit well with me.

I saw this on the day it ran and sent an email to the editor noting the inaccuracy with regards to that Eggleston show at MOMA. Several hours later I had a response from the Guardian informing me that they would bring it up with Martin. By the end of the day Martin had sent me an email explaining that the article was refering to the UK but it hadn't been clearly stated.

Stupid me. I forgot the punchline.

How Martin Parresque is that?

for me this is all about how photographs are never about what you want them to be about. they just are. Madonna's team has tried to work this photograph to their advantage, but despite the soft sepia tones, look the psychological content of the picture itself. It is a very ambiguous moment. it is hard to tell what is going on, it almost feels like the other people were told to sit around Madonna and pose. They are expectant of something. Or waiting. It is a very weird picture.

forget about romanticism... the sepia treatment helps reduce the obvious contrast between dark and light skin tones, which is my guess as to the real reason for using sepia in the first place.... yes, full propaganda!