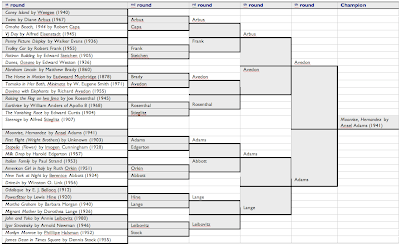 A great response to yesterday's post so here's the full bracket (click to see it full size) and the intro and comments I was asked to write. But please bear in mind that these brackets are more a starting point for debate than any definitive pronouncement. And for those who want more on brackets go to bracketsmackdown.com.

Let’s start by saying American photography so dominates the medium as to make other countries’ contribution a footnote. So we’re really choosing the most iconic photograph of all times. And what are we looking for? A visceral image, one that is embedded in our cultural subconscious, one taken with the greatest skill by an artist whose entire body of work is capped by that one transcendent image that is totally unreplicable. One that you can close your eyes and it will come floating into the space between your mind and your eyelids with something between a shiver and a sigh of pleasure.

Two indelible World War I images, one of war, one of peace, from transplanted European photographers who made their way to America to find fame. Capa’s picture was taken as bullets flew, Eisenstadt’s as confetti streamed down. Victory goes to the photographer who risked his life.

Two of the greatest night-time photographs ever taken, both technical tours de force. The Abbott is filled with the romance and promise of the big city, the Link with the romance of small-town America and wonder at man’s ingenuity. Link is schmaltzier, which means Abbott wins.

Head to head go two female heavyweight contenders. Leibovitz’s photograph is not just about a famous couple but is the high-point of her sneakily conceptual imagery – pulling a theatrical gesture out of her famous subjects. Lange’s Great Depression image combining photojournalism and great portraiture has come to symbolize man’s dignity in the face of hardship. Lange by a whisker, if only because she came first.

The uber-landscape against the uber-fashion photograph from two of the most controlled artists in American photography. Both pictures, while carefully set-up on large-format cameras, could have only been taken the split second they were taken. Both are perfect in every way. But such is the spirituality in Adams image that it even trumps a beautiful woman and an elephant.

Posted by The Year in Pictures at 8:06 AM

never heard of before but i find it all very intriguing.

"Let’s start by saying American photography so dominates the medium as to make other countries’ contribution a footnote."

C'mon man... Really? You americans are so closed upon yourselves, always licking each other, so concentrated in fixating your own navels!

Material for dozens of brackets.

transplanted European photographers who made their way to America to find fame ...

Sorry for not commenting abut this sooner... This Bracketology post was SO COOL; it sort of blew my mind. I keep going back to it to review each of the brackets.