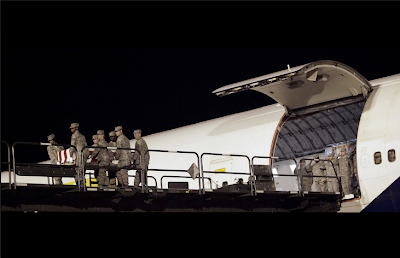 April 4. The casket of Air Force Staff Sgt. Phillip Myers, who was killed in Afghanistan, is carried by an honor guard off the plane in Dover Air Force Base in Delaware. Photo by Evan Vucci-AP

This past Sunday marked a sad occasion – the first day photojournalists were officially allowed to photograph the unloading of a U.S. military casket from a transport plane. The photo ban was put in place in 1991 by President George Bush and with only a few exceptions, there has been no media coverage of the returning caskets of the more than 4,000 troops killed during the wars in Iraq and Afghanistan.

A few weeks after President Barack Obama took office, Defense Secretary Robert Gates signaled he was open to changing the policy, and this past Friday the Pentagon released the details of its new policy on what are euphemistically called “dignified transfers”. The very next day, Air Force Staff Sgt. Phillip Myers, 30, of Hopewell, Va., was killed when an improvised explosive device exploded while he was on duty in Afghanistan. His wife became the first military family member to consent to media coverage under the new policy.

The media agreed not to photograph Myers’s family, who also declined to be interviewed. The family stood next to a van out of sight of photographers. The photographers were restricted to a single spot at a 45 degree angle to the plane, but Evan Vucci of AP managed to get one picture which rose above all the others I have seen. Set against a jet black sky and the gleaming white plane, the most unsung participants in the event – the soldiers assigned to the transfer - balance each end of the picture, either carrying the casket or saluting. Vucci’s framing and the moment captured leave a gaping hole in the picture and in our hearts.

The truth may rarely be easy to hear or see. But without the truth, we cannot offer love. And without love, there is no healing.

Funny how this didn't make the news in the general media. Thanks for posting this bit of news.

The loss of thousands of Americans and hundreds of thousands of non-Americans has not been recorded so it has never been a visual we have shared. With the Vietnam War everyday the images were embedded on our brain and people spoke up and insisted that it be ended.

We share the responsibility for standing silent and not objecting to the constraints on information imposed by the government.

"Funny how this didn't make the news in the general media. Thanks for posting this bit of news."

It made the news in Canada...