Black is the Old ... Invisible?

Last month, to great acclaim, Vogue Italia created the first completely “Black Issue” of the magazine. Shot by Steven Meisel with four different covers and featuring virtually every top black model, the issue sold out within 72 hours and in an unprecedented move Vogue Italia rushed to reprint 30,000 more copies to meet demand.

How absolutely great, but now the August issue is out – themed around a faux funeral photo tribute to Yves Saint Laurent - and there’s apparently not one black model to be found. This is especially ironic given the fact that Yves Saint Laurent was one of the first major designers to regularly feature black models in his runway shows. You would have thought they could have found room to at least fit Naomi Campbell in somewhere. Wouldn’t she look chic in widow’s weeds? This kind of tokenism ultimately seems a step backwards to me. 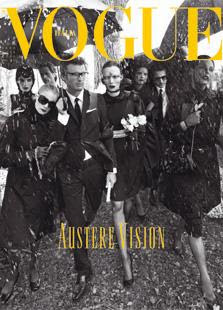 The August issue of Vogue Italia

Anyway, ever helpful, here’s my progressive solution – every edition of VOGUE should henceforth be required to regularly feature a model I just became aware of, but who has been in the business a while - Lakshmi Menon (the Bundchen of Bangalore). Already appearing in ads for Hermes and Givenchy it seems hard to believe this kind of pan-cultural beauty could have any negative effect on the bottom line of any fashion magazine. 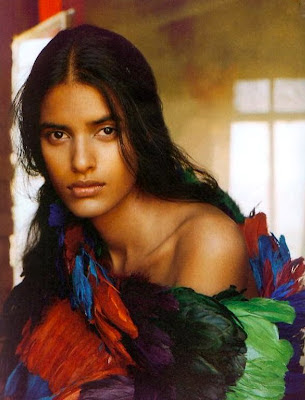 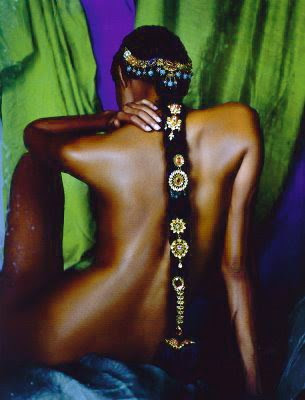 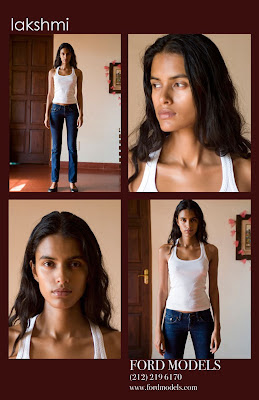 Posted by The Year in Pictures at 9:32 AM

I agree. Lakshmi is stunning. Seems that middle America is about ready to accept models that don't look like Christy Brinkley. Heck, the most beautiful exotic-looking woman ever on television is one of the hosts of Good Morning America: Bianna Golodryga. That's about as middle-of-the-road show as you can get.

wow. I wonder why they didn't choose to use any ethnic models for the YSL tribute? surprising.

What an amazingly awful oversight..hope they read this.

To add inslut to injury, one of the tombstones bears the inscription "Black"...

AGREED! Unfort, in the "white"-male dominated, heteronormative, westerncentric society that we live in, it will be awhile until major changes are seen. But changes are a happenin'.