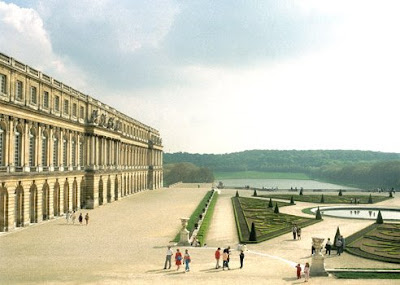 For many years, a card of this photograph of Versailles taken in 1985 by Luigi Ghirri has been pinned up above my desk. I love the scale, the color, the formality, and the relationship to painting. It also looks like it would be a large Gursky size print but in reality the original is snapshot size, which adds to the intrigue.

Luigi Ghirri was born in 1943 and died in 1992, at the age of 49. During his short life he revolutionized Italian, if not European photography, but for a number of reasons he is barely known in the States. However, all this should change now that Aperture have published the first American monograph of his work titled “It’s Beautiful Here, Isn’t It …”.

An early colorist and a prolific writer, Ghirri’s snap-shot style observations blended conceptualism, surrealism, and topography. His favorite subjects included constructed collage-like still lives, storefronts, and interiors. One of his favorite photographers was William Eggleston and with brilliant initiative, Aperture editor Melissa Harris managed to corral the notoriously word-shy photographer into selecting and commenting on some of his favorite Ghirri pictures. It’s a fascinating insight into both men. Courtesy of Aperture, here are excerpts of the interview accompanied by the photographs under discussion. 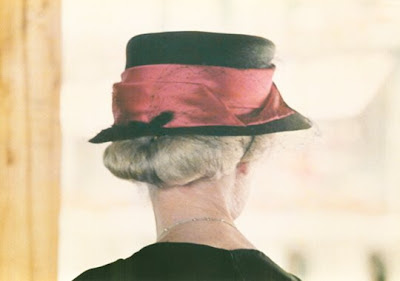 I happen to like pictures of the rear-view of someone’s head. (My fondness for rear-views of heads culminates in my admiration for Gerhard Richter’s 1988 painting “Betty”.) I made one myself, in Los Alamos, around the same time as Ghirri’s. 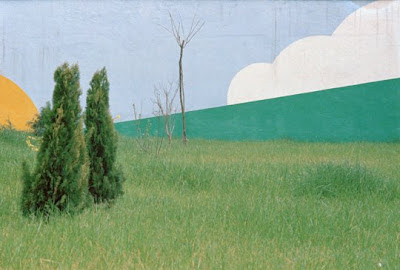 In general, I ike Ghirri’s use of color and the fact that the work feels empathetic. There is also a sense of place in his photographs, yet they are not a bit regionalistic. Sometimes his work is extremely painterly – the landscape "Modena (1973)" is quite beautiful. The shades of green, from that austere wedge to the fuzzier, yellow tinted grass and shrubs, and then that circular chunk of yellow. Beautiful. I like everything about it. I like the play among reality and mystery, the constructed. Everybody thinks this is new, but Ghirri was doing it more than thirty years ago. And the photograph of maps, such as another titled "Modena", also from 1973, are so simple but exactly right. 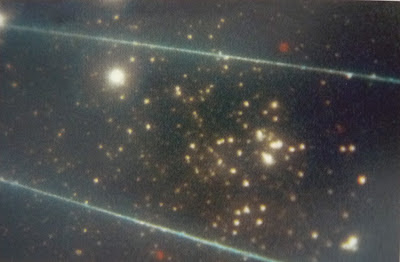 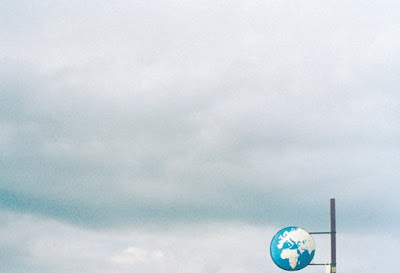 I keep returning to the word “surprise” with Ghirri’s work. "Lido di Spina (1978)" feels much more surreal and is very unexpected – but he’s still playing with you, and I like that. 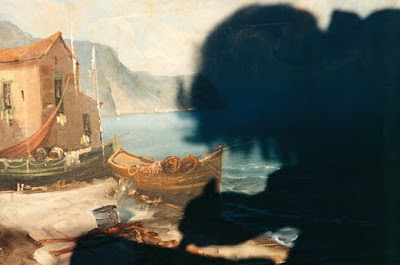 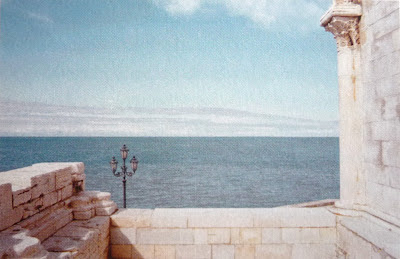 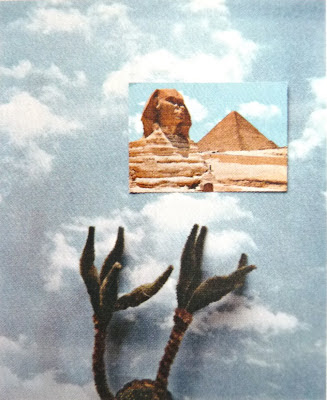 "Modena (1978)" is an image I would never make. It’s quite elegant; it reminds me of Irving Penn’s work which I love. "Trani (1982)" is another very elegant picture. And look at "Amsterdam (1980)" just about everything is interesting about this work … the strange plant (I guess it’s a plant) juxtaposed with the Sphinx and the pyramid and more clouds. I’ve always liked the idea of collage. 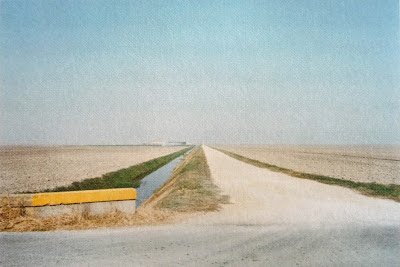 I am extremely drawn to the minimal and more sublime aspects of Ghirri’s work, as well as those images that are more confounding – those in which you don’t know exactly what you are looking at, in which he is gently teasing the viewer about what is real and what is not like "Near Lagosanto, Ferrara (1989)". In fact I might just have to copy that one: “Have you seen my Ghirri?”

There’s a lot Ghirri did that I don’t do, and that I probably won’t do – but I’m sure glad he did it! 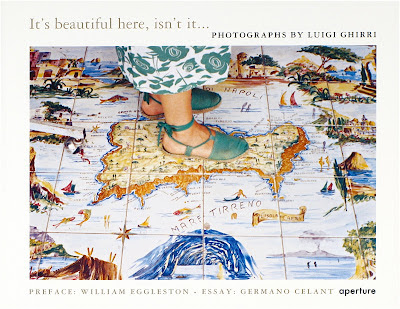 P.S.
As I was writing this I realized I did not know what reference the title was making so I e-mailed Melissa Harris and got this reply which is too good not to share:

Dear James,
No reference in the text at all, but here goes...

I was trying to think of a title for the book which would be more interesting than the typical: "Luigi Ghirri: photographs of Italy" or something.

I was sitting at the Empire Diner one morning for breakfast and started thinking about Antonioni's "The Passenger" which I had seen at BAM a few nights earlier (such an extraordinary film -- I had never seen it before) and kept recalling the line that is exchanged 3 times with the Jack Nicholson character--which is something like, "It's beautiful here isn't it" -- sometimes a question, sometimes an observation.... It suddenly occurred to me that this could be a perfect title for the book, albeit odd. My mind was in some mixture of Antonioni and Ghirri land as I left the diner, thinking that maybe, finally, I had a title and saying it over and over in my head (i hope) while picturing Ghirri's images -- and I walked smack into a sandwich board -- it was for NY magazine (i think it was NY magazine) featuring Jack Nicholson on the cover (some new movie he was in)! Of course, I took it as a sign! So, I ran the title by Lesley, Andrea, and Kristian and they loved it, as did Yo (Yolanda Cuomo-- book designer) -- and then I asked Paola Ghirri about it and she adored it. So--that's that! Hope this helps

Best to you,
Melissa

Posted by The Year in Pictures at 9:58 AM

looking at the first photo relaxes me. What an amazing talent.

also, my mother happens to like pictures of the backs of people's heads too. She would always make me turn around so she could get a shot of the back. funny.

This review and Eggleston's comments made me want to buy this book more than any blog posting I've ever read. Thank you.

Thanks for exposing his images,which I had no idea of, to us. I love the minimum view and the painterly quality, so refreshing in a world of Photoshop effects and hardline journalism, not to be critical of either here.

I too will buy the book, the images have a wonderful etheral quality to them. They are proof that there is just no substitute for camera film, if these shots were taken on my Lumix it would really over saturate the colours, which is good at times, other times it is really irritating.
Thank you.

Ghirri's extraordinary way of composing an image reminds me, in some very strange way, I'm sure, of Paul Cezanne. Each element of a photograph fully occupies its own space, while maintaining an active relationship to the whole.

Thank you for introducing this work to us!

The pictures are very relaxing and artistic. How on earth people has the talent to take the beautiful pictures as that!

The book just looks lovely. I'm so happy that you added the extra bits about how they came up with the title. It's always interesting to see the creative process working.

Thanks James, and Melissa Harris of course!
I love those eye and mind-opener photographers, like Eggleston among others that teaches you to "see".

So, I just placed an order for the book online.

Very interesting interview and photos. I will have to admit that I had not heard of Ghirri before I read this. I will definitely need to see more of his work. Thanks for sharing this with us.

The first photograph (Versailles) is reminiscent of a scence in one of my favorite films - L'année dernière à Marienbad.

Like some of your other posters, I immediately bought the book. Breathtaking! I can't think of anything I've seen in a long time that has done more to inspire me as a photographer. Very, very nice work here. Thank you.

Thank you for sharing this amazing work and the tale of the title...I'm next in line to buy one.

James: judging by the enthusiastic ensuing comment section, I realize that the way your post is illustrated is unintentionally misleading. The first picture, indeed beautiful, is not included in the book. And most of the following ones only appear to illustrate Eggleston's text at the beginning and are rather smallish. For some strange reason, they were not included in the actual body of work selected for the monograph.

Strange, yes, as they seem more cohesive and of a "better" feather than the ones actually chosen. Which is kind of sad. I find the book quite a bit flawed. Patchy.

I've just discovered Luigi Ghirri's work and will be buying his book very soon. I love the surreal quality of his photography. Thank you for sharing the story about the title of the book--very interesting and amusing.