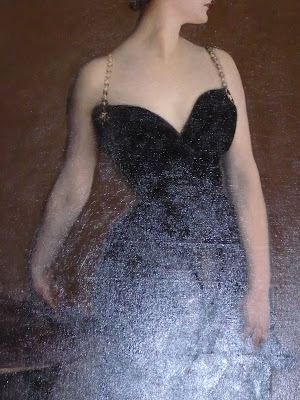 A couple of weeks ago, I was blogging about the photographer Tim Davis and mentioned in passing his series of photographs of paintings in which the play of light on the varnish gives the original work new photographic meaning. Then yesterday I went to the Met to hear Scott Schuman speak on a panel about fashion and blogging. With a few minutes to spare I took a quick spin around the second floor and came across one of my favorite paintings that had unexpectedly been relocated. I pulled out my camera and took a picture not realizing that the flash was on (a big no-no as the Met guard was quick to tell me). However, in the instant I saw on the viewfinder what I had captured, I realized I had made a Tim Davis!

Does this picture have any validity? Based on a position I've taken many times, the answer is absolutely and unequivocally no. Which is frustrating - because as objectively as I can judge it I think it's a pretty good picture, but without context, history, background, etc., it has little meaning. Much of its meaning, in fact, comes from Davis's prior insight and work.

I recently saw a photographer as a favor to a friend and he came in to the gallery, young, confident, and with a totally mediocre portfolio. I made an effort to be as polite as possible. At the end of his presentation he pulled out a little envelope and with a flourish showed me a group of snapshots of sky, horizon, water. At this point I thought it would be doing him a favor to point out that this notion (the appreciation of the ever changing but always formal abstraction of horizons) had been ably expressed by Joel Meyerowitz and Hiroshi Sugimoto. Unless he had some radical new insight into how to re-imagine this kind of picture he was unlikely to end up with a one person show in New York. He looked at me incredulously and as though explaining it to some idiot said "But this is The Ganges."!

(FYI - my picture is on top and Davis's below.) 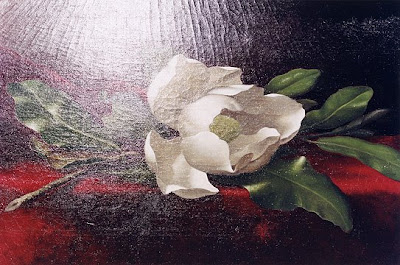 Your post reiterates the importance of art world context as the primary criterion for assessing anything offered as "art."

You assert that your lovely image of Madame X lacks "validity," by which you must mean that it doesn't count as art. Without context, the image lacks "meaning."

And yet you've created, partly by accident, a wonderful image that demands attention. Your image provides new insight into the subject material, while working intelligently with light, frame, and form.

Personally, I'm more interested in the delight created by an artwork than I am in it's value or validity. But then, I have a very small stake in the commercial market.

I was hoping this post would spark a dialog. So thank you Barry for your response.

I agree up to a certain point. The pleasure a work of art gives the viewer is important, but the idea behind the work is sometimes almost a subliminal element. Without Edward Weston's work of the 1930s we would not have seen the beauty in the abstracted form of the natural world (until someone else came along to do it.) Without Nan Goldin we wouldn't have seen how the snapshot aesthetic could be enlarged and expanded in the direction she took it.

I would say the context I look at things through is art historical. A progression of concept, form, and content. And I would argue that this applies to pretty much everything we observe, interact with, and consume. And the real spark is usually found in the original, not the knock-off, be it Keds, Oreos, or photographs of canvases or horizons.

In Tim Davis' photograph idea there is a lovely paradox: the camera image of the flower, which would surpass in realism a painting of the same, is deployed to undermine the realism of the painting by highlighting its surface. Like kicking a man when he is down!

I really enjoy this blog. Thank you.

a lot of what we see we register without actually knowing that it is there, a great spanish artist diego lara said "everything i see is mine" which i love, but we have to be able to transform it into something that is really ours.

all artists, musicians, designers etc. take form their predecesors, would there have been a walker evans as we know him without atget?

on a more mundane level i made this series of pictures two years before seeing the work of william christenberry, i'd moved on by then but it was certaily valid for me:

Singer Sargent's Madame X! So lovely, but my personal favourite is Lady Agnew.

ah the frustration of the art world. You just have to hope that your train of thought follows that of the trends without forcing it. And that how you think hasn't been captured already. You have to grow separate from the cultural flow and maybe, just maybe, while making art because it's in you, you'll cross paths with the rest of the people out there interested in visual communication. all the while working at something else to pay the bills. ooph.

Very interesting post. I personally like your version better and would enjoy it completely if I came across it in an art museum. Why does he necessarily get to own all reflections on paintings pictures? Why are there 3 or four examples of one color canvasses on the walls of Moma and not just one?

The Mayans and Egyptians both invented the arch independently from one another and then used it in different ways with their architecture. I can;t tell you how many times as a photographer, I later come across someone who has already done an idea I had and had begun to work with and thought, "Well, there photos of x are certainly not as beautifully executed as mine are, but now it will seem like I am copying or unoriginal. Two people can work the same theme and let's face it, one can be much more talented than the other working withing the same theme.

Concept and process should not always trump the beauty and feeling of a work.