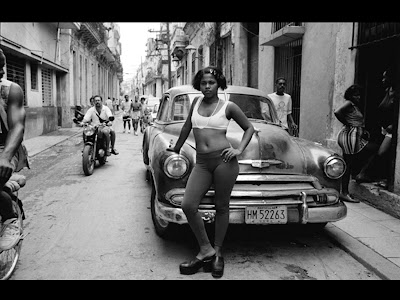 Going to see David and Peter Turnley’s show “McClellan Street” at the Leica Gallery in New York (on through February) reminds me to share what I have always said is the best film ever made by a photographer – David Turnley’s “La Tropical”.

Vibrantly filmed in black and white, “La Tropical” tells the story of Havana’s extraordinary open-air dance club – a club that on crowded nights pulls in more than ten thousand people! Exploring the lives of a handful of the clubs dancers and regulars, the film examines Cuba’s complex race situation – all while immersing us in the heat and rhythm of the music and dancing that is the lifeblood of the country’s culture.

The trailer (below) is somewhat misleading. The film is richer and deeper than just a dance film but a whole lot livelier than “The Buena Vista Social Club”. And while it previously could only be seen on the festival circuit, it just became available on DVD.

Really enjoying the blog. Learning about visual literacy is my greatest challenge and I feel your work is helping widen my perspective. My own work at Coutorture.com is veering from our heavily verbal analysis of fashion into more photography making you an invaluable resource.