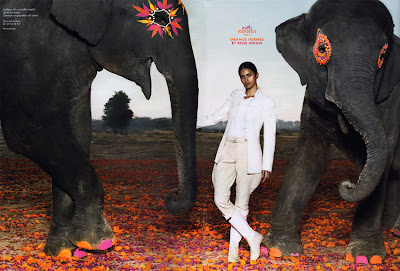 I sat down with a big pile of magazines and papers yesterday and before I even got to any editorial, I was discomfited by the new Hermes ads in which elephants (how original!) with vast amounts of paint around their eyes were used as props.

A few minutes later, the inspiration for this – Avedon’s famous “Dovima with Elephants” - popped up in the New York Times “Evening Hours” section, seen being admired by an anonymous viewer at the Park Avenue Armory art show. ( A large print of "Dovima" now sells for close to $1 million.)

Moving on through the Times, the Sunday Magazine (praised by me last week for their Ryan McGinley portfolio) committed double imitation – not only using elephants as props for an 8 page fashion spread, but stealing the title “Trunk Show”, from Bruce Weber’s infamous 2005 elephant shoot for W Magazine. (In Weber’s pictures the pastiche was front and center as some of the biggest names in fashion created original couture for the elephants themselves. At least Weber, a known animal lover, saw fit to contribute to Elephant Family - a charity whose mission is to help save Asian Elephants.)

But enough with the elephants – O.K.? 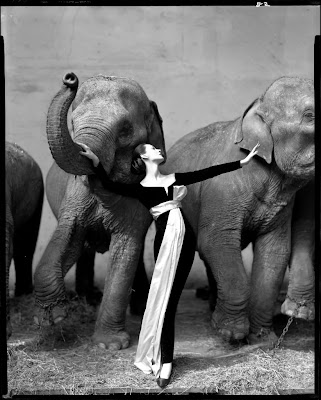 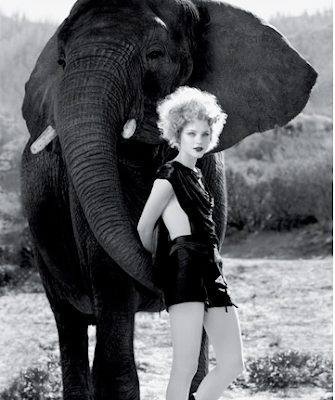 From the New York Times Magazine. 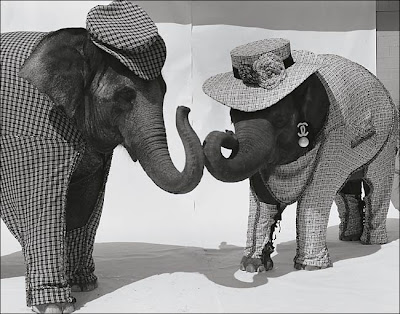 Posted by The Year in Pictures at 9:53 AM

Avedon did it first and by far the best.

Thanks for taking a stand! Elephants are not props!!

I agree about the concern (however do you wear leather shoes? Do you eat fish?) for the animals.
That Avedon & Dovima came first is clear-- but isn't most photography recycled? Especially commercial photography? At what point is it homage? When is it copying? Is it not possible that India inspired the picture foremost, not Avedon (no disrespect to the Master!)? Wasn’t Avedon the one who admiringly was guided by the portraiture of painters like Rembrandt? If it is in the same medium it is copying, if it crosses a medium it is not? Could the estate of Richard Avedon file a copyright suit, I don't think so.
In any case I love this blog.