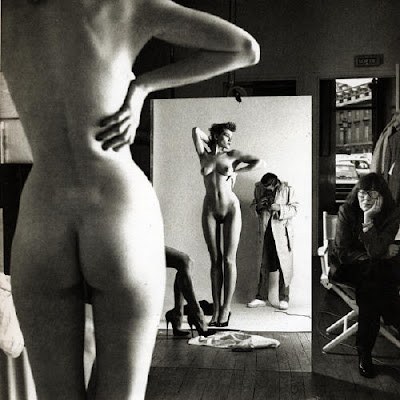 I just moved all my photo related boxes to an airy storage space in Long Island so long-buried things are coming to light. Last week I was going through a box of old documents and came across this brief 2003 interview with Helmut Newton which was to run on a failed precursor of this blog when Helmut's sudden death made it seem opportunistic. Five years later, Helmut's vitality and humor are what stand out for me.

Your about to be published autobiography stops in 1982. What have the readers missed?

Nothing! People who reach their goals are very uninteresting. What could I have written about the last 20 years? I met a lot of awfully boring Hollywood bimbos. I earned a lot of money. I fly only first class.

It would have been fun to say I f***ed her and I f***ed her, but my wife June and I have an agreement not to talk about such subjects.

So there’s never any jealousy?

I am feminist! If I finish a job abroad early, I always call June from the airport. I never want to surprise her. This morning I asked June to go look for my glasses. She asked “May I go through your pockets?” I find this is proper - even after 54 years of marriage.

Are you saying you are sometimes tempted?

I look at models like a farmer looks at his potatoes.

In your book, you paint yourself as an unusual child.

I was sickly and fainted a lot and I masturbated like a world champion! My mother was always fearful of my health so I was driven to school by a uniformed chauffeur to avoid germs. I was not allowed to touch a railing or to handle money. I was spoiled, unbearable, and an awful coward.

When you were 18 you fled Nazi Germany on a ship to Singapore. Yet your recollection of that time in history is “I screwed through the Mediterranean. I stuck with married women around 30 years of age.”

You must understand that for the Jews that ship was an island paradise because finally no-one could hurt us. Every evening there was dancing, drinking, f***ing. But I always found 17 year old girls less exciting than older women who were glamorous, sophisticated, and had sex appeal!

When you arrived in Singapore you had five dollars to your name, which you immediately spent in a brothel.

My sound financial sense told me there was no difference between having five dollars and being completely broke.

You never really talk about the Holocaust.

I have no animosity against the Germans. I will never forget or forgive but I find the Germans are the only ones who are seriously confonting their past. When I was offered the Great Federal Order of Merit, June said “You can’t possible accept it!” So I asked Billy Wilder and he said “You’ve got to take it!” I preferred listening to Billy.

As you say in your book, you achieved all your goals long ago. What still gives you pleasure?

I am old hypochondriac crapper who has to take 13 pills a day, but I still love cars. I drove a white Porsche with red leather seats when I could not even pay my rent. I recently acquired a red Corvette which was specially made for me in Detroit. It has flaming tongues on it. A f***ing great car!

Favorites:
"I was spoiled, unbearable, and an awful coward."
[but really the whole answer this is attached to, too]

"I look at models like a farmer looks at his potatoes."

[anyway, though, the whole thing. that's what i like]

this is great. i love this.

my fave part:
If I finish a job abroad early, I always call June from the airport. I never want to surprise her. This morning I asked June to go look for my glasses. She asked “May I go through your pockets?” I find this is proper - even after 54 years of marriage.

What a wonderful, sad, wonderful interview.

Was it really required that you blank out his curse words? It's distracting and unneeded.

what a fantastic being he was!

I have always admired Helmut Newton's photography which introduced the public to a new style of viewing fashion. Now I understand his images even more after reading this fantastic interview. His was as interesting as his images of gorgeous women in fashion.