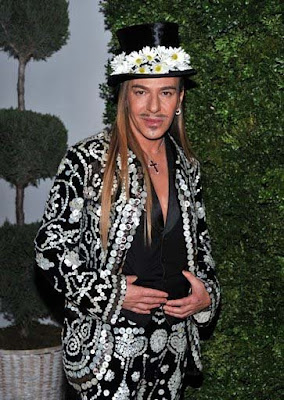 I wanted to write about the John Galliano affair because as a Jew with an English accent and a posh education (St. Paul’s School and Yale) people often assume I'm not Jewish and are therefore more open (and conspiratorial) about their prejudice. I’ve stopped counting the number of times people have inadvertently confided to me about some place being “too Jewish” or “jappy”, or bemoaned the power/stinginess/grubbiness of the Jews. Most of the time I say something. Sometimes I let it pass appreciating that the person has revealed themselves.

The Galliano affair is both an old and a new type of story. Old because prejudice is as old as civilization and new because it was new technology that did Galliano in. A video recorded on a cell phone showed his anti-semitic rant was a habit, not an isolated incident and confirmed the inevitability of his firing.

After the first account of Galliano’s restaurant behavior surfaced and he was suspended but not fired, a smart friend of mine who is the p.r. for The Met Costume Institute said “there must be other things out there for them to have suspended him so quickly”. And lo and behold the next day the “I love Hitler” video surfaced and Galliano was fired. But Christian Dior and LVMH must have known about Galliano’s habit of drunken tirades - so no great credit to them. The only person to have come out with any integrity was Natalie Portman who refused to wear her planned Galliano dress to the Oscars. This was the only thing that made me deal with her Oscar for what I thought was one of the worst films of the year. (Yes – I’m afraid I’m anti-Black Swan!)

Prejudice, I believe, is an ingrained characteristic. There’s nearly always some “type” you tend to internally react against. Rich, poor, fat, skinny, gay, black, Jew, WASP, etc.. I know as many people who don’t like bankers as bankers who don’t like welfare mothers. And while we should all work to fight this feeling and respect everyone, our prejudices are part of what makes us an individual. Our dislikes define us as much as our likes.

Posted by The Year in Pictures at 7:38 AM

Very well said. Sadly predjudice is everywhere and like you say ingrained.

I was also particularly struck by the technology aspect of this affair. It reminded me to stop and think before I photograph a stranger on the street without asking their permission.

I'm not condoning Galliano's rant. But I certainly value my own relative anonymity and I should show more respect for others'.

I always found it tough to speak up, even when I hear something truly appalling. But if we allow people go around voicing nasty prejudices without challenge, we let them assume everyone feels the same way. I remember learning that the discomfort that came from speaking up was a good thing. The silence that follows is the sound of a light bulb turning on.

I'm sharing your sentiments about racism in public, black swan being a terrible film ,and as an Israeli fashion designer living in France have heard many anti jewish comments.
For sure I could never enjoy Galliano collections (if he ever does any)as I have

I was more amazed that Natalie Portman was the only person who took a stance on this issue. Everyone was quick to blame Dior or the person recording, everyone but Galliano. We must never give up on standing up to prejudice and all actions that are against love, as Natalie beautifully put it.

I have a profound mistrust of antisemitism. Some of my first memories are of monuments commemorating the killing of Jews. As a child, I learned the words on these monuments while learning to read. To be an antisemite, I have always reasoned, is to be a failure. However, I can hardly believe that people "reveal" themselves to be antisemitic simply by an unwise choice of words or a bad joke told. Because of history we have an obligation to be vigilant, but I am also wary of the power of denunciation. At first I hoped that this was all there was to Galliano's outburst--a drunken provocation for the sake of transgression for which he was denounced, unfairly. Alas, as you mentioned, a pattern had been established, and he was fired for that. It is sad, all around.

The labour law in France makes it extremely easy to suspend someone if something they said or did has harmed the company. Typically, the employer *has to* wait 7 days before firing the employee.

What happened with Galliano was so shocking that they fired him before these 7 days, i.e. most likely unlawfully - as a result, most likely they will have to negotiate a fee for his departure.

I don't think the attitude of the people at Dior can be condemned. Sydney Toledano is Jewish (his father was a prominent representative of the Jewish community in North Africa) - and as you point out, people refrain making anti-semitic comments in front of Jews. Perhaps people working *for* Galliano at Dior knew, but it is almost a certainty Toledano did not know (even from hearsay). I don't think a single second he would have suffered anti-semitic remarks in his own companies (Galliano & Dior).

I otherwise agrees with most of what you are saying. The expression of prejudice is absolutely not acceptable.

I very much agree with what you say, we all have our own prejudices but in admitting they are wrong we maintain our humanity. In believing them to be acceptable what do we become?

I agree with everything you have so eloquently said. Privately held prejudices are a nod to the understanding that such views are not generally acceptable. I found it curious that Galliano was suspended so quickly by Dior, but the second public incident proved he had a track record of this. I have also wondered whether Galliano's Dior provided "bodyguard" was, in fact, hired to keep Galliano out of trouble. And I agree with you that Black Swan was a paen to hysterical overacting.

I also admired Portman's statement, but a more cynical blogger pointed out that as the face of a major Dior campaign she had little choice, that she did not resign or denounce Dior, so lost nothing financially as a consequence of her statement.

Well said, JD. The irony of this happening this week of all weeks is that Pope Benedict XVI published a book in which he exonerates the Jews for the death of Jesus, the ostensible source of much of anti-semitism in the world. Clearly, with the likes of Galliano, Mel Gibson or that damfool Charlie Sheen, it is clear that this particular prejudice will be with the world for quite some time. But I am encouraged that it gets harder and harder to get a free pass when expressing those sentiments.

extremely well parsed. On prejudices in general I think our refusal to acknowledge their basis in some sort of context in sociological reality.

Generalizations about entire groups of people don't occur when none of people in that demographic have EVER been known to behave in a way or engage in antisocial behaviors or whatever the stereotype is. They are all based on something. To pretend all men are equal in every way is silly. But it is more so to assume anyone you meet will even partially conform to your preconceived notion of "people like that" are is equally stupid.

each and every person on the planet is an individual. Amazing number of permutations of appearance and dare I say it inbred traits that may or may not be nurtured by the person or the environs in which they are raised.

Take two less than intelligent people, couple them, and their offspring are statistically unlikely to win a Nobel prize in mathematics. But flowers do grow in the cracks of asphalt.

So prejudice is useful only in that it helps us make basic select sort decisions in our lives. I'll go to this bar not that one to find someone I will find compatibility with. I will choose to explore this neighborhood on a Saturday morning, not a Friday night. And that's it.

I agree, Galliano's attitude, even drunk and probably psychologically unstable is unacceptable.
I also find it hard to speak up when someone express a racist or prejudiced view. We have to do it though, it must become automatic.

Hear hear! I'm reminded of that scene in Gentleman's Agreement where Gregory Peck's character talks about the 'good people,' the 'nice people' who claim they're not prejudiced, condemn it in others, then help it along and wonder why it still exists.
Liz

thank you for your post.
being of jewish-french descent, i know that it is very hard to speak up when people knowingly or unknowingly cross these lines before us.
i can tell you that it is not uncommon lately to be at a party in france (or many other places) and hear comments made about jews after one has had a few drinks. it is interesting that galliano, sheen and julian assange all made anti semetic comments that surface in the same week but the comments by these fools are the ones that came into public light.... i'm sure there are countless others that stay "private".
silence is acceptance and i thank you for your eloquent post.

I am perhaps too late to this post but I am so glad that I didn't miss it, especially as the commentary, both yours and that of your readers, is for me, some of the most spot on, honest and yet open that I have read. As someone who appreciates fashion dearly, it has been horrifying to watch this story unfold--I was truly shocked by the number of comments on fashion blogs that rushed to Galliano's defense before the video was known about and then the half-hearted concessions afterwards.

I have seen racism all over the world in my travels and never understand why someone feels the need to seperate themselves so drastically from their fellow man. As an American living in France, it especially scares me that racism is so very prevelant (as I live in the South it is largely against people with North African roots) and so blasé. Have we learned nothing?

Don't be afraid to be "anti-Black Swan"-It's this decade's "Showgirls"
(although not as good).
If Aronfsky had a sense of humor he would have cast Elizabeth Berkley instead of Winona Ryder.

love your clarity. could have not put it better!
thank you for that.