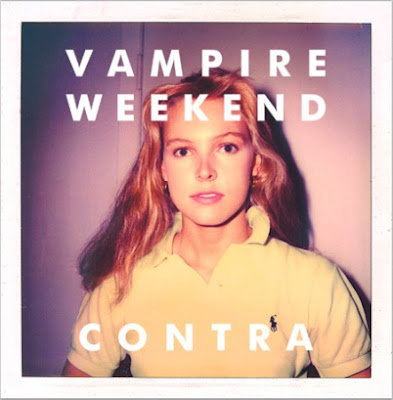 An interesting story by Lyndsey Parker from Yahoo's music blog:

While debate regarding unauthorized use of Facebook pics rages on, a photograph from the pre-digital age has gotten one indie group in some serious trouble. Former fashion model Ann Kirsten Kennis is suing buzz band Vampire Weekend for a cool $2 million, claiming a 1983 photo of her was used in their Contra album cover art without her consent.

Kennis, who currently resides in Fairfield, Connecticut, with her family, was reportedly very surprised to see her doe-in-headlights likeness in a preppy Polo shirt on the Contra cover, when her daughter showed her the disc earlier this year. "Her daughter came home one day and said, "Hi, Mom, see your picture?'" Kennis's lawyer, Alan Neigher, told Entertainment Weekly. Neigher also told EW that the photo was never intended for professional use. "It was taken by her family. It was a Polaroid, not a modeling picture," he insisted. "Her mother was a chronic Polaroid snapshot-taker, and used to sell whole archives of photographs to these shops, five bucks a hundred or whatever. Her mother may have given away to a charity bazaar a whole ream of photographs. We just really don't know...[Kennis] has no idea how that photograph got into the photographer's hands."

The photographer in question is Tod Brody, who along with Vampire Weekend's record label, XL Recordings, is also named in Kennis's $2 million misappropriation-of-identity lawsuit. See, Kennis claims Brody duped Vampire Weekend into believing he was the photographer who had shot the Polo pic, and that he forged her signature (as "Kirsten Johnson" in one spot and "Kirsten Johnsen" in another, Neigher says) on the photo's release form. Brody of course has denied this, telling EW: "Ms. Kennis's claim that I didn't take the photo is blatantly false. I took the photo in 1983. The photo was in my possession the entire time, for 26 years, until it was delivered to Vampire Weekend." (Incidentally, the photograph seems to have been removed from Brody's website, www.todbrodyphoto.com, although it was once included in the Portraits section under the file name "Kirsten.")

The band, who reportedly paid $5,000 to use the picture, have also issued their own formal statement: "As is standard practice, Vampire Weekend and XL Recordings licensed the rights to use the photo on the cover of Contra pursuant to a license agreement that contains representations and warranties authorizing this use of the photo. Now that a lawsuit has been filed, we look forward to having the matter resolved in court."

So there are several questions here. First, who took the photo--Kennis's mother or Tod Brody? And if it was the mom, then did Brody really forge Kennis's signature and claim he was the real photographer? And if so, how did he think he'd get away with such a scam, since it was inevitable that Kennis would eventually see the cover? (After all, the album did debut at number one on the Billboard album chart in January 2010, so it was hardly obscure.) Conversely, if it was Brody who took the pic, is it possible that Kennis failed to read the fine print and didn't realize she was signing away rights to the picture 27 years ago?

And finally, did Vampire Weekend have any responsibility--as Kennis alleges--to make sure the photo release form's signature was legit? It's unclear just how much the band knew about their cover model before this lawsuit; when asked about the girl in interviews at the time of Contra's release, they gave deliberately vague answers. Lead singer Ezra Koenig told MTV News: "We know where the image came from, but we're not being very specific about her. We don't know her or anything....there's just something infinitely fascinating about a nice portrait of somebody, especially when she's got this ambiguous look, and people can read a lot into it....It makes you realize how much you can imagine about somebody when you know nothing about them, based on only a few signifiers."

The mystery surrounding the enigmatic golden girl on the Contra cover continues, although not in the way Koenig may have imagined. Kennis retired from modeling years ago; additional photos of her, from either the past or present, professional or candid, are seemingly non-existent on the Web (even the profile pic on what appears to be her private Facebook page is a photo of a dog); and she's refused to speak to the press thus far (she did come to the phone when the Village Voice rang her recently, and was reportedly polite, but declined to be interviewed). Perhaps when the reclusive ex-model finally appears in court, we'll all find out the real story behind this now-infamous photograph.

James, this is a really interesting story and really keeps the discussion going on issues of legal rights to an image. Sadly, when I tried to share your post on Facebook I yet again got blocked with the site saying that the material has been reported as inappropriate. This time I filled out the form FB offers if you feel that a site has been improperly blocked. I asked them to please take a look at your site, that it is the personal site of a well-respected NY gallery owner containing nothing any more controversial than many other things I've seen on FB over the years, and to please, PLEASE finally remove the block on your site! This is insanely ridiculous, especially in this country of "freedom of speech"!

If the picture was taken by her mother and sold to a charity bazaar or second hand store for $5 bucks a hundred, then this is a found photograph/object and can be used in any context without payment to anyone. If Tod Brody took it 26 years ago and forged signatures, then that's another matter. In any case, Ms. Kirsten claim for $2 million is so ludicrous that one hopes her grab is thrown out of court and that she receives nothing. Or she could settle amiably and accept a handsome fee for the use of her image from Vampire Weekend, who seem to be the real victims here.

The above comment -- "If the picture was taken by her mother and sold ... for $5 bucks a hundred, then this is a found photograph/object and can be used in any context without payment to anyone" -- simply cannot be correct. I've worked in the design end of book publishing for over a decade, and it is common knowledge that, however you came across an image, if the person can be recognized, and if they are still alive, they can sue you. If myself or my peers use found imagery, we will always crop out at least half of the face. Things might be different for an image used on the inside of a book; but if it's used on the jacket, you'd better have an authentically signed release form, or else get ready to call your lawyer.

I just did a search on "orphan works" and found quite a bit of (conflicting, of course) information: http://www.copyright.gov/orphan/

I tend to believe the photographer. It looks similar to the work on his site (and lo, he must have had a lot of traffic/exposure since this story broke!). I guess we'll just have to wait and see the decision of the court . . .

@Jennifer, FB has got a very strict, though at times nonsensical policy of taking down pics they consider inappropriate. An example, my friend's profile pic has been removed by FB because she was holding her daughter in it, when she was an infant and naked (only the girl's torso was visible in the pic, by any standards a regular, non-ofensive picture).