A Travel Advisory and a Travel Tale 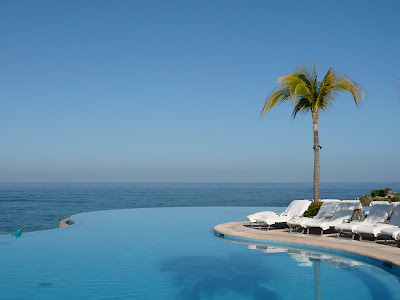 The day after AIPAD, I headed south to Punta De Mita, Mexico, to join my family on spring break. (And now I sit blogging by the pool.) But getting here was no fun. Because of the current runway work going on at JFK, the delays have backed up all the way to LaGuardia and my wait in the security line at the Delta terminal at LaG was one hour and five minutes! So New York travelers beware. (See below.) 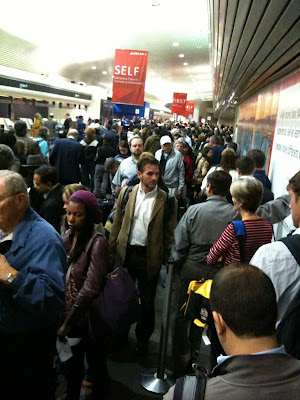 On a very different travel-related tack, a friend recently told me a true story about a passionate romance that recently took place between two Americans abroad. She was an artist and he was a banker, sparks flew, days and nights were spent in the rapture of new love. They agreed to meet several weeks later at some romantic island and the woman got there first. Would the man make it as promised? Would the sparks still fly? Waiting inside the lobby of the hotel she finally saw him come through the doors pulling a wheelie bag. And in that instant the dream shattered. She knew she could never love a man with a wheelie bag. 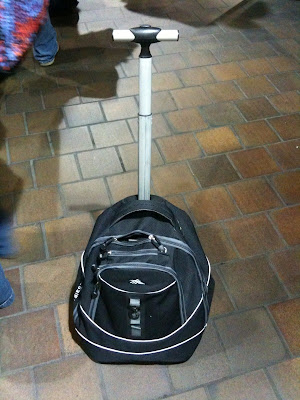 People seem to take different sides on this story. Either she was right and he was an un-macho fuddy duddy not suitable for our passionate life-embracing artist. Or she was a fickle neurotic clearly not capable of a relationship of any depth. What do you think?

I’m simply here to sing the praises of this wheelie backpack that was once my son’s that I’ve started to take on planes with me stuffed with computer, magazines, etc., and remark on how effortless it was to stand in line for the hour and five minutes pushing this along rather than to be carrying or picking up and putting down whatever wheel-less carry-on I might have had before. Viva el wheelie!

Posted by The Year in Pictures at 5:55 PM

That story makes the woman sound incredibly shallow. There is nothing wrong with a wheelie bag, as you call it. I'd rather cart one of them than end up with neck and back pain from having to carry a heavy bag by a strap. Viva el wheelie, indeed!

At some point or another - earlier or later - relationships bring us face to face with our fears, anxieties and rages.

Either we choose to work with these feelings or we find a convenient excuse to bag the relationship. (Pun!)

In any case, the ending of the relationship has nothing to do with the excuse.

I think being a workaholic, i.e. working while you're on holiday, is good. Not everyone is so lucky to love what they do. Have fun in Mexico, Mr. Danziger.

I am all for a man, or anyone, who values efficiency enough to go for a wheelie bag. I didn't realize there was any sort of stigma against that sort of thing. How lame.

what if the wheelie was full of cash?

She could buy him a new piece of luggage!

Wheelie is mostly the way to go. As always however, the trick is in the details. Wheelie means business, which is not necessarily a bad thing. Wheelie does not mean Indiana Jones. In this case, her glimpse of the unposed man revealed the (suspended) reality behind the shortlived passion. She saw at once the impossibility of an artist having a real relationship with a banker. Not fickle, but a misjudgment nevertheless to think that such an adventure could be repeated.

Some get stoned, some get strange,
but sooner or later it all gets wheel.

I love a good wheelie bag. Nothing wrong with that!

Hey, I read your stuff all the time. As far as the wheelie goes, he's lucky to have culled her out as soon as he did.

Intriguing story. One of those moments when an illusion is shattered. Like the scene in Anna Karenina where Anna looks at her husband and in an instant decides that his ears are too big.

Sounds like the bag is just a symbol or excuse for something else, maybe a fear of getting close and vulnerable. Or seeing him as he is, and not her idea of how she wants him to be.

I love bags with wheels, saves your back and neck. :)

As someone who started travelling heavily in my late 30s, I quickly abandoned the glamour of Grace Kelly-esque train cases for whatever works. And wow are you happy to not have to haul a heavy bag on your shoulders after a 13 hour flight. No judgement here and yet she was just being overly romantic--nothing to sneeze at either!

while i have a bit if a thing about men who don't drive stick - if i was falling madly in love with one, i'd be more then happy to teach him how.

how a great and relaxing vacation.

I dont think it makes the woman shallow at all. Some people hate carrots and others dont like men with wheelies.

She obviously wasn't interested in anything real and I would bet has no sense of humor!

Depends on the wheelie....those that the accountants carry around give me the creeps.