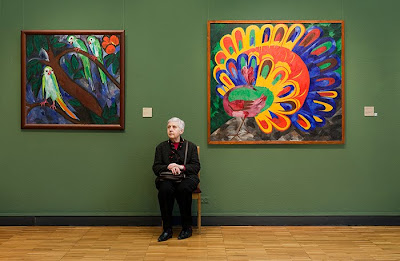 I first met my now good friend Andy Freeberg when we did a show of his photographs of Chelsea gallery front desks. Titled "Sentry" the series took a ironic look and the intersection of art, architecture, and ritual that is the world of the high end Chelsea art gallery. The prints were beautiful and luminous and made quite a stir.

Already an accomplished photojournalist, the show vaulted Freeberg into the art world and the pictures were subsequently shown around the world and acquired by major museums and collectors. This left him with the question of what to do next. The answer as you will see above and below was to continue his exploration of the art world with a series of pictures of Russian museum guards and the work they were guarding. Like "Sentry", they record the interaction (or lack of) between the individual and the work of art in photographs that are works of art in their own right.

March appears to be Freeberg's month, and the Russian show opens tonight at the Paul Kopeikin Gallery in Los Angeles. At the same time Freeberg's work can be seen at Houston's Fotofest, and a book is about to come out.

Freeberg's latest excursion into the art involves dealers sitting in their booths at art fairs. So if you see a guy who looks like a cross between Brad Pitt and Robert Pattinson with a Canon 5D Mark II, watch out! 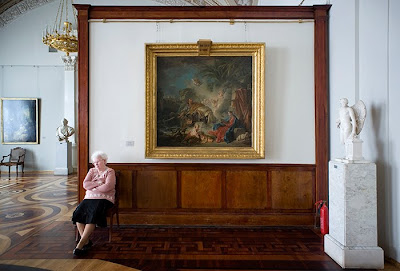 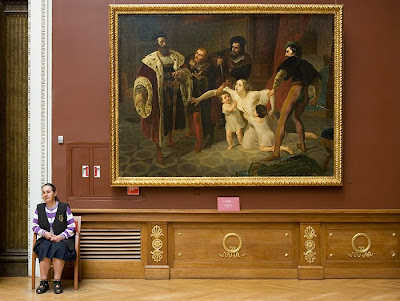 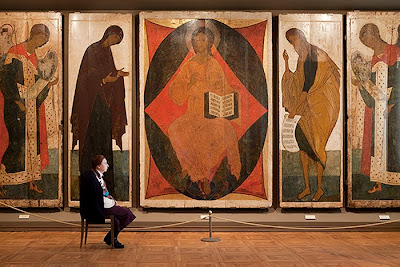 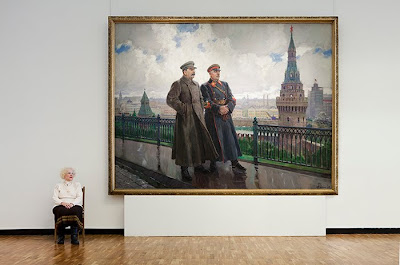 And from the series "Sentry": 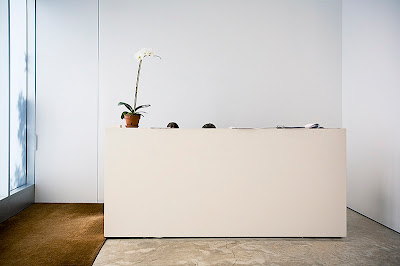 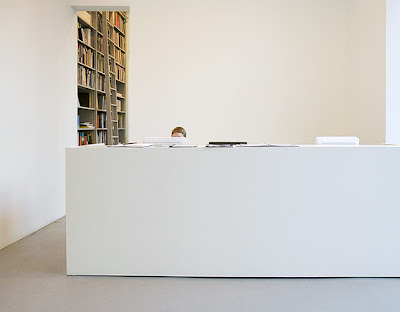 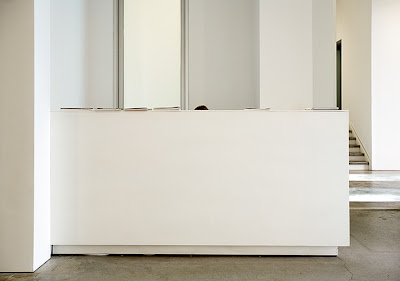 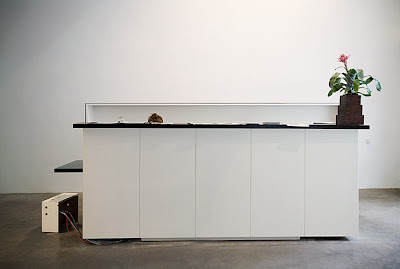 Posted by The Year in Pictures at 7:28 AM

Thank you for introducing this artist to me! I love his focus on capturing human presence in otherwise still, empty, inanimate landscapes.

I always wonder how much time it takes to become calloused to works that are on exhibit. Thank you for sharing and encouraging discovery.

After having worked at two museums, what I find interesting is the placement of chairs within the gallery space, not necessarily the individual's lack of engagement with the art. It seems so random, and potentially harmful to the art (especially the one with the empty chair just waiting for someone to lean their head back..). It is unlike any seating arrangement I have experienced in any museum anywhere (except Russia of course) where benches are placed in the middle of the room, and guards are usually standing. They seem to have a much different idea of what it means to "protect" the art (I don't know about you but I bet those old ladies are a lot tougher than they look!)

I agree with Liv, I wouldn't mess with those Babushkas!
Fab pictures, very witty.

i loved the sentry work and these new ones are superb too!

I didn't realize these two series were by the same photographer. The Sentry images were whimsical, but the Russian guards takes the whole idea to another level. I'd love to see the big prints of these!

Fantastic photography, I love the "Sentry" set it's so clear cut and fresh. Thanks for posting!