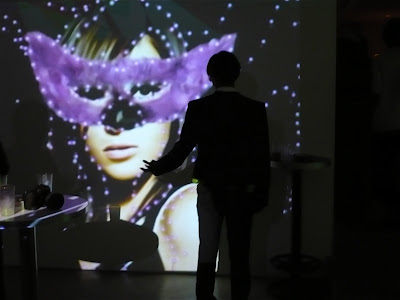 A hipster grooving to his shadow at the opening night after-party.

It seems silly to try make any sensible pronouncements after six days in a country, four of which were spent in an exhibition hall. Saying how wonderful the people were sounds condescending, especially as at the end of the day, they’re just like us only generally more polite. So I thought I’d sum up with a selection of superficial visual impressions, some taken on my iPhone and some on my Lumix.

And now I’m getting ready to start my 13 week beginner’s Japanese course. (Seriously.) I can’t wait to go back. 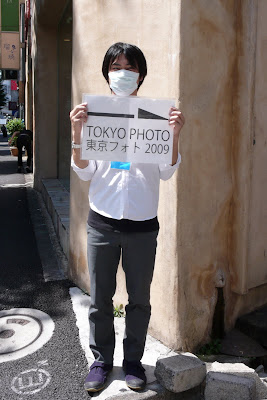 Tokyo streets are not marked by name (it’s a complicated system where a location is pinpointed by area) and so this guy was taking turns with his colleagues to hold a sign on Roppongi Street to guide people to the correct turn-off for the fair. 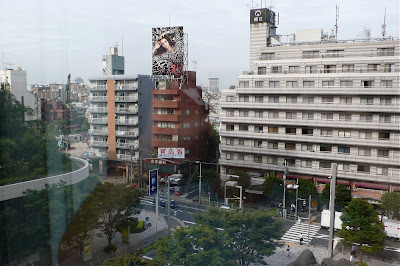 A hotel room begins to seem like home after a few days. Here's the view from my window at the Grand Hyatt Hotel - the best hotel I've ever stayed in. 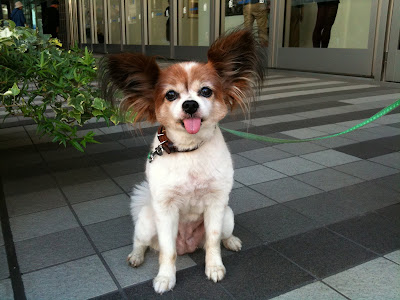 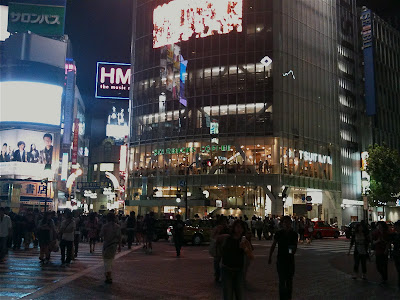 The famous Shibuya crossing that seems right out of "Blade Runner". 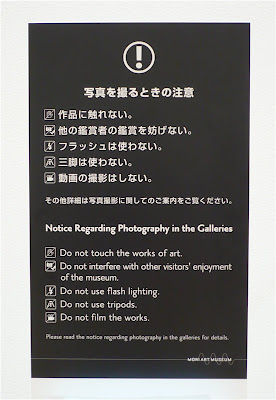 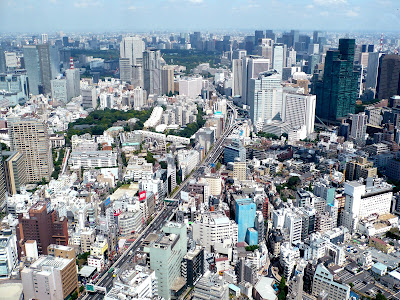 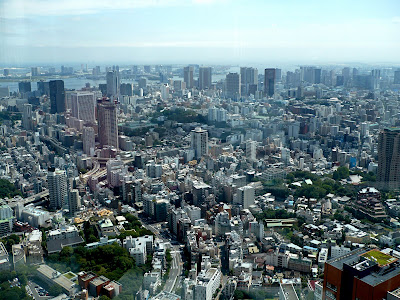 Two views of Tokyo from the Mori observation windows. 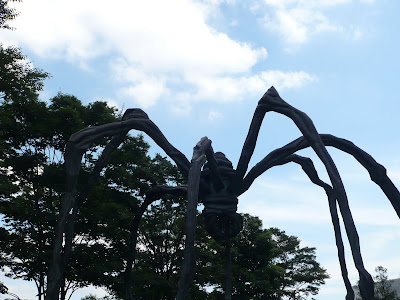 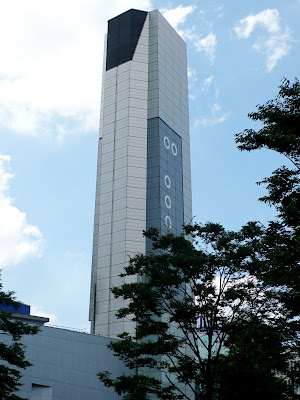 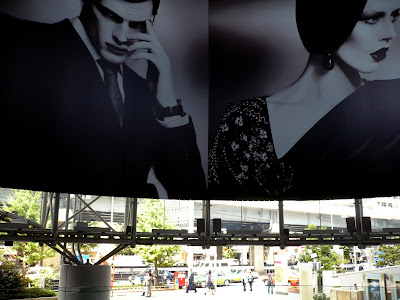 Armani ads hover over the escalators going into the Roppongi subway station. 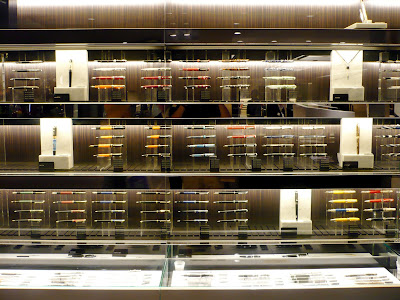 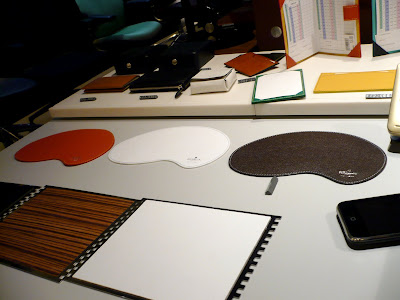 Everything for your desk at the Isetan men's department. 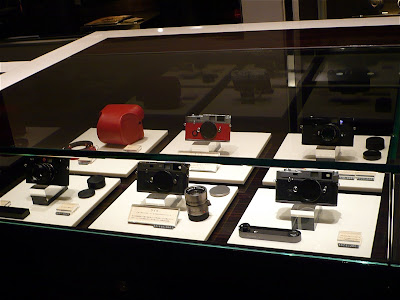 The custom Leica display case at the Isetan men's department. 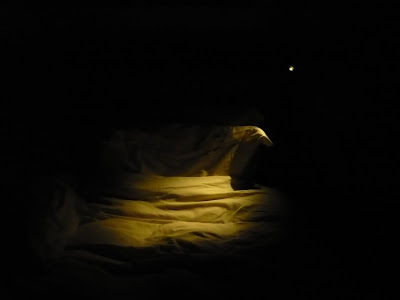 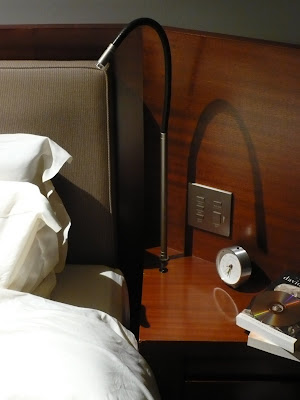 A bedside light that shines a pinpoint of light so you don't disturb your partner. 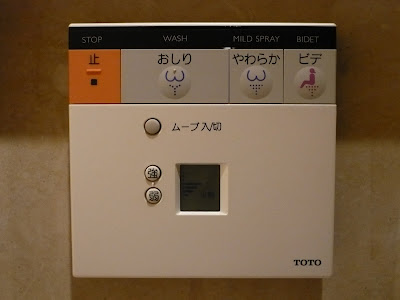 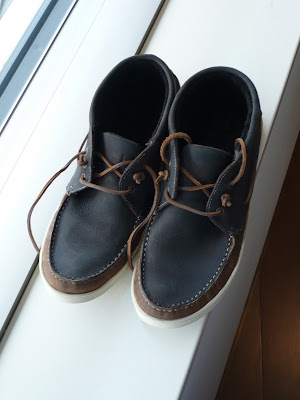 My one purchase for myself - fleece lined boat shoes made exclusively for the Japanese market by a Spanish shoe company. 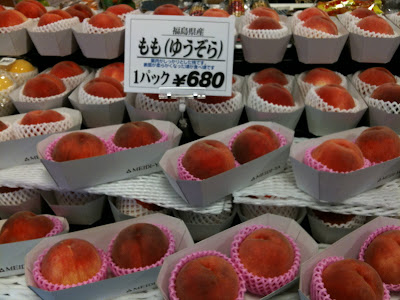 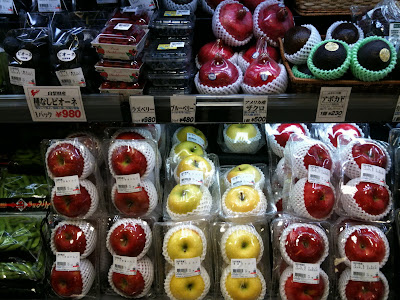 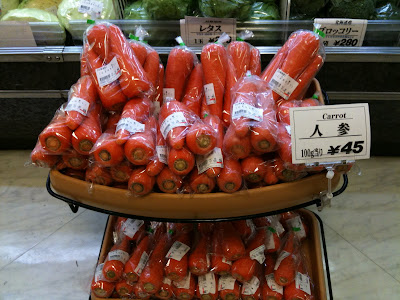 Some details from Ameida, a market round the corner from the exhibition hall where I would buy my lunch. 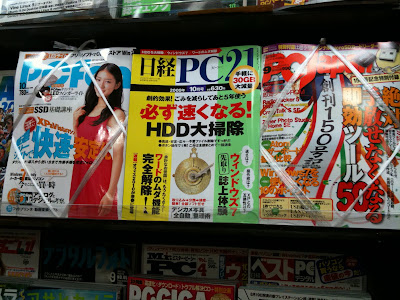 Magazines with goodies inside at the airport.

Interesting photographs. I love the fruit wrapped in cellophane. The perfect consumer culture, it would seem.

I'm an avid reader of your blog and also a lover of Tokyo. I have been five times, with a sixth trip planned for October of this year. It's always interesting to see someone's first take on Japan, seeing someone fall in love with it (as I did five years ago). The vending machines, the toilets, the attention to detail, the architecture, the food, the trains, the people, the shopping...and of course, the photographic potential. It's all so very good.

Really great photos, I have to go one day.

So envious of your visit. There is something so achingly fascinating about Japanese culture, I could look at images from there all day.
Every home should have that light.

Thanks for sharing your great photos of what must have been an incredible trip. I think I could spend a few hours drooling over the Leica case at Isetan. If only I had the finances for not only a trip to Tokyo but to purchase one of those beautiful cameras...
And only in Japan would you find people accommodating enough to stand and hold a directional sign that could just as easily be posted on a wall. One more example of the Japanese culture's wonderful attention to detail.

My experience in Tokyo is different, as my visits were all business trips as an investment manager.I fell in love with Tokyo the first time I visited. So different! So exciting! People who cleaned the subways and bow to the commuters to honor them! Quaint traditions of handing over business cards! Interesting food! Taxi drivers who wear white gloves! By the third time the novelty had worn off and I came to view it as a city with opaque people who value politeness over truthfulness; an infrastructure that, with only a few exceptions, is stuck in the 1970s; ethnically homogeneous in a troubling way; economically unproductive, with too many people doing too few jobs (do we really need multiple women in hotels whose sole purpose is to push the up button for the elevators and graciously wave you in?); and a work ethic that borders on insane. I have to go back to Tokyo next week and I already can't wait to get back. Now Hong Kong....THAT's a great city!

isn't the Hyat hotel you stayed in the same hotel the main characters from Lost in Translation did?

I forgot to ask: where are you taking your beginners' Japanese course? Somewhere in Manhattan, I assume. I've always wanted to get an introduction to the language.

I'm taking it at The New School. Once a week for 2 hours for 13 weeks. I'll keep you posted!

Ah, I rememember those food halls--bliss but so confusing as we didn't speak a word of Japanese (and where to eat the food? Not on the street!). I also remember wanting to buy EVERYTHING in the Japanese Dept. Stores, as it was all artfully arranged, just so, and if you touched one, you'd get a brief little scolding look and they'd RUN to the back to get the item for you to purchase.

Great photos from your trip--thanks.

The pictures are really amazing, i wish i could live or just visit Japan. I's one of my long life dreams. I've heard it's really hard learning japanese, how was it for you?

wow they are some great shoes. i am heading to japan in a few weeks. can you let me in on where you found them??

That unusual dog is a Papillon.

Thank you for such a wonderful blog. My husband and I visited Danziger Projects when we were in New York (visiting from Edmonton, Alberta, Canada) and I saw you through the gallery window. I wanted to say that in person, but lost my courage as I thought you'd think me creepy.