Before Robert Frank's “The Americans” show opens at the Met on September 22nd and Frank fever hits New York, this uncredited story from NPR’s website (which I've taken the liberty of editing) shines some fresh light on one of Frank’s lesser known images from the series:

One of photographer Robert Frank's most famous images aroused a particular interest from his friend, beat writer Jack Kerouac. In his introduction to Frank's book of photos The Americans, Kerouac writes, "That little ole lonely elevator girl looking up sighing in an elevator full of blurred demons, what's her name & address?"

Today, Sharon Collins lives in San Francisco. About 10 years ago she visited the San Francisco Museum of Modern Art and found herself drawn to a particular photo — the same photo Jack Kerouac wrote about.

"I stood in front of this particular photograph for probably a full five minutes," she says. "And then it dawned on me that the girl in the picture was me."

The iconic shot shows a young girl, pressing an elevator button, looking up with an enigmatic expression. At the time, her name was Sharon Goldstein, and she lived in Miami Beach. At fifteen, she got a summer job as an elevator girl at the Sherry Frontenac Hotel. She says the hotel was always full of tourists, and many of them had cameras. Although she wishes she remembers this particular tourist, she doesn't. But she pieced together what happened by looking at Frank's contact sheet.

"Robert Frank took about four photos of me without a flash in the elevator. I didn't know he was taking them. And then when the elevator emptied he asked me to turn around and smile at the camera. So I flashed a smile, put my hands on my hips, and hammed it up for about eight or ten frames."

From the single image that was chosen for The Americans, Kerouac guessed she was lonely. But Collins thinks otherwise.

"It's not necessarily loneliness, it's ... dreaminess." 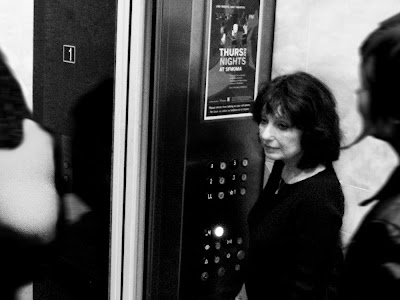 Posted by The Year in Pictures at 7:51 AM

lovely story, reminds me of the couple on the motorcycle in another photo from that book who were identified, I think it was last year, as being from Indianapolis or surroundings, and their reaction to being part of photographic history.

I love the picture. It's a look every teenager has perfected.

What strikes me is how totally arresting the original is, and how unremarkable the followup 2009 image is.

Also, I'm tickled by how your intro calls it "one of Frank’s lesser known images," while the next line refers to it as "One of photographer Robert Frank's most famous images." Somehow you're both right.

what a great story and a wonderful surprise for her.

Wonderful story. Just stumbled upon your blog and I love it. Great job.

I agree with Joe Holmes, what a great picture the original is and how the 2009 one lacks of interest/emotion. Another great photographer died a few days ago, please remember the work of Willy Ronis.

I too stumbled across your blog a year or so ago. Thank you for the nostalgic story behind the photo by Frank capturing the enigmatic expression and ghost-like reflections of the passengers. I like that the woman did not recognize herself at first and that she traveled from Miami Beach to San Francisco, which is my dream.

An interesting review I saw in argentinian newspaper yesterday about E.J. Bellocq
http://www.lanacion.com.ar/nota.asp?nota_id=1176159

I just saw the Frank exhibition at the Met today. It was incredible! When I saw the elevator photo, I thought of your post and enjoyed thinking of the operator recognizing herself when she saw the photo on view at SFMoMA. A great story about a great photo by a great photographer.

What an interesting story. I enjoyed reading about the different points of view. Kerouac was perhaps painting a picture. Suspending disbelief if you will. Maybe she looked lonely to him and that gave the picture.image meaning to him. She knows/thinks it was dreaminess. That is what made it meaningful to her. Part of the art of photography, I think maybe, is being able to create an impression and affect people with it. Thanks for sharing. :)

The second photo was made in the elevator at the SFMoMA during Ms. Collins visit to see the Frank show.

That's, that's, that's not to be believed.
Next thing you know, the family of a long-dead New Yorker -- appearing as a young man at a lunch counter in a Walker Evans photograph -- will recognize him from a show at the Metropolitan Museum.
None of this is possible. Nope.

Amazing story:) Incredible! If it's really the same woman i wonder on that happen:) I have a vacation in US soon, By the way I will jump to San Francisco Museum in case I could be there and will see the photo by myself:) Thanks for the post, very interesting!