The Sartorialist at Danziger Gallery 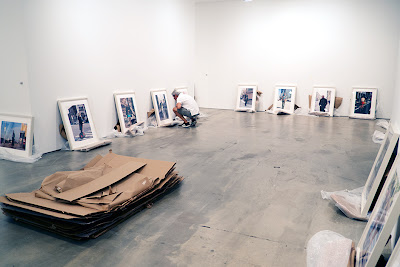 Because you can't have too much of a good thing, tomorrow we open our second show of photographs by Scott Schuman - The Sartorialist. The opening is on Friday and all are invited.

Comprised of 37 pictures taken since our last show - most of which appear in Scott's new book "Closer" - the work shows his continuing evolution as a photographer. The compositions are more varied, the human element more pronounced, and the work now seems to belong as much to the ethnographic school of photography and the tradition of August Sander, Penn's "Worlds in A Small Room", and Avedon's "American West" series as the world of street fashion.

Scott - who is both modest and smart - told me recently that he didn't really think his work would be appreciated until 40 years after the pictures were taken. It's a short show, due to previous commitments we had made for the fall but from today through September 15 you can judge for yourself. But I'll post more pictures tomorrow.

And yes. That's me in the picture above taken from The Sartorialist's blog. Proud to be seen in all my finery!

Posted by The Year in Pictures at 4:36 PM

Excellent! I've been an admirer of Schuman for quite a while -- I can't wait to see these prints (though I'm sorry I can't make the opening).

I would love to attend but unable to. Will you be doing a book signing any other dates in NY?

I'm afraid not but I'll post any other times and places when i hear of them.