What Artists Give Us 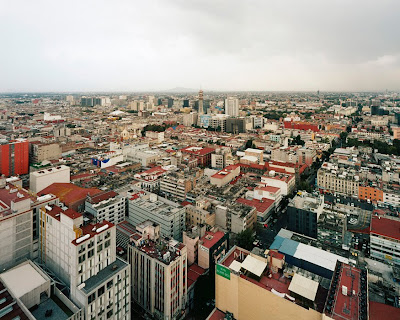 First, please excuse the current lapse in posts. I was away on the west coast - about which more to come as soon as I get a chance.

Just before I left, however, I went to see the just opened show "Cities" by Sze Tsung Leong (at Yossi Milo) and was much taken by the craft and consistency of vision of this relatively new to the scene photographer. Leong - as you will see from his website produces vast serial bodies of landscape work sticking to a fairly rigid compositional format for each series. This in itself is nothing new, but Leong travels so far and to so many places that his encyclopedic breadth crossed with his pictorial skill combine to take us somewhere new.

A sure sign of this is that when I looked out of my hotel window in Los Angeles, I felt I was seeing a Leong picture! And as I thought about this, I realized that one of the things artists give us is a way of defining and ordering what we see. A sea horizon can be a Meyerowitz or a Sugimoto. A random gesture in a park can be a Winogrand. A tackily colored interior can be an Eggleston. And rather than taking away from the pleasure of seeing these things, for those of us who are not artists I think it actually adds pleasure. Recognizing the association is in itself a creative gesture. Thus the realization that the scene outside my window (below) was like a Leong was both a gift from the artist and a gift from and to myself. 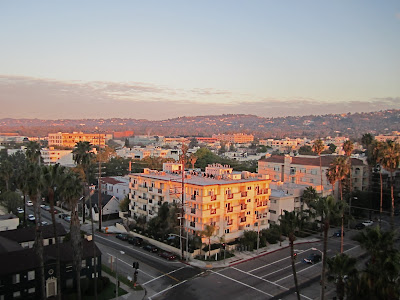 Beautiful juxtaposition between those two.

Where would we be without a dialogue (internal and external) between art, nature and society? It is what keeps us going, I think.

i like how you put it: they "order" what we see. it's always interesting how we can start looking at things completely differently after seeing some new photographer's work. also, great photo of LA.

Off topic, but I am SMH at Cass Bird's tribute? to Josephine Meckseper's 'Pyromaniac 2' on the cover of today's T magazine. It feels really unnecessary.

I agree with you and was mulling over what to post about it. Stay tuned!

The task of an artist is to show us different points of view.
Great work, overall about China.

Funny. I just posted about (among other things) how your blog has changed my gallery experience: http://gallimaufryandminutiae.blogspot.com/2011/02/explorations-pt-1.html

Thanks for your posts.

I love when that happens... I see a scene that reminds me of a certain photographer's work or, almost more fun, I see a scene and take a mental photo of it if I don't have my camera at the ready.

Another gesture that photographers perform via the simple act of picture making is to immortalize a place (for us) and an experience (for thmeselves.)

Excellent point, and it all goes double when artists absorb others' works and see and capture the world in a different way. I shoot nothing like Lee Friedlander but I swear he informs my work.