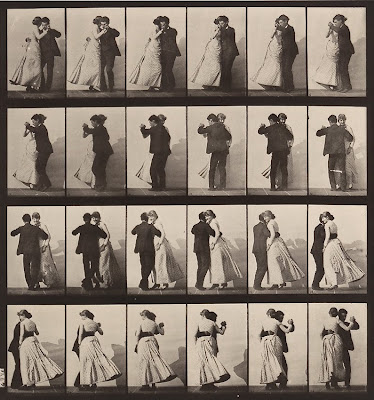 An occupational hazard of my profession is that given the number of prints we show, store, etc., - things go missing (although they all eventually show up). It's not like a painting gallery where an artist might drop off a dozen paintings for a show. We literally deal in hundreds of images and prints. Some are consigned, some are owned, others get dropped off and never picked up.

There's a slightly different story regarding the picture above, however. Many years ago, I was browsing in the Museum of Modern Art's bookstore and came across a French book on motion in photography with this Muybridge of a couple dancing on the cover. Muybridge is best known for his studies of animals in motion. (He was the person who proved that a horse's four legs do all leave the ground at once but not as previously assumed in the legs out rocking horse position. After Muybridge set up his cameras to settle a bet between two rich San Franciscans, his pictures revealed that the only time a horse's legs all leave the ground at once are when they are tucked under the body.) But I digress.

I brought the print back home and eventually took it to Washington D.C. for my friend David Adamson to scan so I would always have a copy and could in fact sell reproductions if I wanted to. (Being from the late 1800s there are no copyright issues.)

After leaving it there for a few months I forgot about it. I was probably busy opening Danziger Projects. And when I finally inquired about it David thought it had been returned to me. I thought I had misplaced it. Several searches at Danziger Projects and Adamson turned up nothing. I had a horrible half-memory of taking it on the train from D.C. to N.Y.C. and leaving the package on the train.

On my last trip to Adamson a week ago, I asked David if he could at least locate the scan so I could have a copy. And then he thought he might have actually seen the print in a drawer. We opened one drawer after another and again when we got to the last drawer the original print of the dancing couple reappeared! It's now back in the gallery. After what must be a at least a seven or eight year odyssey from first seeing the image in a book, clearly the only solution is to get it framed and hang it on the wall. Things that go into boxes and shelves have a way of hiding themselves!

Hope I haven't bored you with the story. But this post is my valentine to all Year in Pictures readers. Happy Valentine's Day. As I never tire of saying - "Photography is love"! 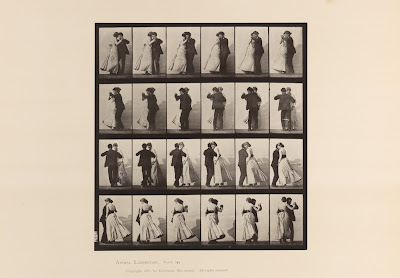 Oh! If you are going to sell reproductions, please let us know via the blog!

Happy Valentine to you.

Beautiful image, you old romantic! So glad you persevered and eventually re-found it.
Happy Valentine's day!

What a lovely story! I check your blog every day in the hope that you will post something that makes my day. Often you do. :)

I think it's a great story, very well told

Thanks for sharing this image! I remember learning about Muybridge and the horse-bet in school. This is such a romantic version of Muybridge's methodical process!

Many thnks for the story and this image. Agreed! "Photography is love."

You never ever bore me. Your blog is great and your gallery is great. Thanks!! Amy Young

Wow,power to serendipity!! I salute your tireless efforts :)and yes, photography is love!

What would best describe this : "Static film "? "Motion photography"?

Stop-motion photography would describe it best.

Oh, I hate those "half-remembered" horrors of leaving something behind. Glad the Muybridge was finally found. And thanks! for posting it for us (I'm catching up on your blog after an extended absence--it's been a lovely feast. Thanks!)

Amazing!!! its a full dance story i like it.
Custom gift cards
Membership card printing