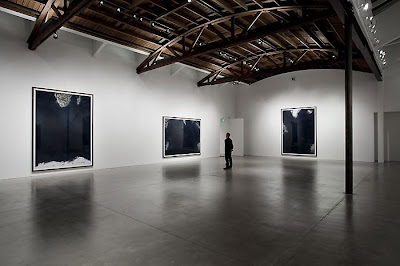 In the “why didn’t I think of that?” category – Andreas Gursky’s latest work, which just finished showing at the Gagosian Gallery in Beverly Hills, presented blow-ups of the world’s oceans printed as large as 100 x 140 inches.

Gursky had not taken these pictures himself. They were satellite pictures of the earth that the artist had worked on and cropped to make the ocean the central point of the composition. But interestingly, he now joins his compatriot Thomas Ruff (and numerous others) in making appropriation his new methodology.

The Gagosian Gallery cleverly obfuscated the point in their press release:

In the new Ocean series, Gursky has for the first time relinquished his position behind the camera to work with satellite images of the world as his raw material, creating contemporary mappe del mondo on a scale befitting the cosmic grandeur of the subject. In their darkly nuanced surfaces, he has worked to reconcile the division between the machine eye and the human eye, continuing the debates and practices begun in the nineteenth century regarding photography and the issue of artistic expression versus objective science.

However it does nothing but underscore the fact that so many people are Warhol’s children.

Today, The New York Times reported that the Los Angeles County Museum had acquired four of the pictures.

They were as sublime as the Rothko Chapel,” Michael Govan, director of the Los Angeles County Museum of Art, said, referring to the Houston landmark. “They are also satellite photography, which is a breakthrough for the artist.”

Mr. Govan was so taken with the suite of works that he persuaded two trustees — Steven F. Roth, executive vice president of the World Oil Corporation, a family-owned company in Los Angeles, and another trustee who wants to remain anonymous — to buy four of them for the museum. Mr. Govan declined to say what they paid. The gallery was asking $680,000 each.

Although this series was created before the Gulf of Mexico oil spill this spring, Mr. Govan said he considered the subject of oceans “a total obsession of our age,” adding, “It’s so urgent, yet there is a timelessness to these photographs.”

He also said that he was reminded of a historical precedent. Just as 19th-century museums often had a globe of the world and a map of the stars as the linchpin of their displays, these photographs, he said, are the 21st-century equivalent. “This is our globe,” Mr. Govan said.

The museum does not have a specific space to show the Gursky images at the moment. However, Mr. Govan said he planned to have a space designed for them in the middle of its historical collection.

“They will be the centerpiece of our global museum,” Mr. Govan explained. And though the works show only tiny bits of continents and coastline, he added, to him, anyway, “the museum itself becomes the rest of the picture.”

So ... $680,000 x 4. There was obviously a big discount. But still, not bad for reprinting someone else’s pictures. One part of me feels this is out of whack, but another part sees the power and quality of the work. As always, the point is - I didn’t think of it (and neither did you)! 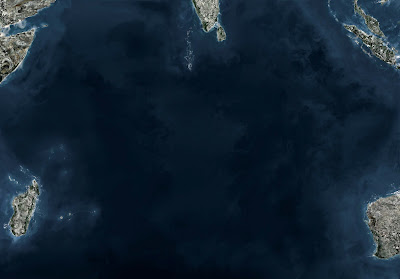 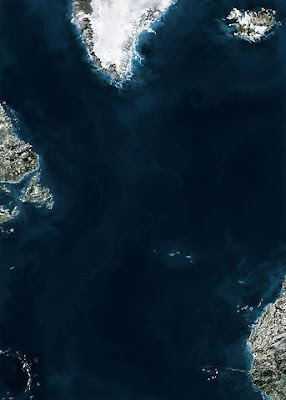 It is out of whack. I concede the creativity it takes to even conceptualize this project - to see satellite imagery as a starting point for one's work . . . but then again, I am a bit put off by the idea that such an insane value is being ascribed to someone's skill at cropping and photoediting. Maybe I need to read more about this work before I say more. Maybe there's more that Gursky brings to this than I am giving him credit for.

Yes, indeed. It seems totally out of whack. The price is utterly ridiculous. And, if it was showing nearby, I'd be going to see it tonight (and I wouldn't care if it was gursky or not, just that quality level).

completely agree with "the Photodiarist."

Going insane, got no brain. Insane in the membrane.

Gursky's most recent works remind me of Damien Hirst selling his works on auction and getting the last laugh as bankers and hedge managers buy purchase while we're all left wondering what the hell is going on.

Correct me if I'm wrong but Gursky is not the first to use satellite photos, right?
Don't get me wrong, I like the work, they have something very fascinating (though I wasn't able to see the real prints in person) and in some ways they seem to be more interesting than some of his later works. But the price is just insane. Still would like to have one in my apartment.

Definitely out of whack. End of story.

this is so boring. another example of an okay photograph blown up so it looks important, and sold for a ridiculous price. its not bad, its just boring.

This is the type of thing that gets stereotyped as the ridiculousness of the art market. Am I wrong in thinking these are high priced well-toned, and cropped NASA posters? Pure concept does not speak to me in photography. The photographer must bring another element to the table to make the work really hers. Personally, I would be embarrassed to a) represent this work as my own b) price that high (understanding idea if that if market will bear . . . but see first sentence of this comment) and c) all that cerebellum and machine does not make an art object that might resonate with me.

While I leave the debate over the art to others, I laughed at your comment "I didn't think of it (and neither did you!"

I guess I would feel more at ease with the price, if some of the proceeds went back to NASA

I'm speechless. OK, I guess not entirely because: "Wow" and "what?!?" comes to mind.

How is this different from Marcel Duchamp and his "readymades"? People hated the Fountain when it came out, too, but now it is seen as the totem of the Dada movement. I think James is exactly right about the genius of the artist in this case being the idea....

It's impossible to comment on the 'value' of the work without seeing it, especially work of this scale seen on my monitor. Epic detail could create a poetic of some kind (something that Ruff's appropriated images certainly denied the viewer). But what is new here, exactly? Appropriation is a century old. Gursky's images and prices are routinely of corporate dimensions. These ones have the potential to move me more than a picture of a row of Prada consumables, I guess. I'm not sure I can say more than that.

It is not really the price tag that freaks me out, that is only Larry Gagossian doing some Gagossian business, but the fact that the art world is bored with terrestrial photography...when I read in The Guardian Sam Leith say about the Mars Reconnaissance Orbiter satellite's photographs"I was transfixed. I don't think I've seen images more beautiful and affecting for a long time", I thought: this is it, we are in trouble, even digital is not good enough any longer, the world want satellite,God's eye view, they are all at it. see also:
http://www.aestheticsofastrophotography.co.uk/
Pimm's anyone?

1. I agree with Rebecca -- I hesitate to judge anything without seeing it in person.

2. I wish I knew whether these same images presented exactly the same way would draw any attention if they were from an unknown photographer. I think that's a fair question to ask about art.

Thank heavens, literally, for Title 17 USC and its provisions for placing some works, immediately, in the public domain. Gursky's not the first to reuse a photograph from the heavens, a photograph first created by an employee of the United States government. An ad agency beat him to it twenty-five years ago.

In 1985 the US advertising agency for a Swedish camera manufacturer parodied editorial fashion photographs in a new magazine campaign. The photograph's background was the Indian Ocean and, in the middle-ground, a space-walking astronaut, Lieutenant Commander Bruce McCandless. It was the tenth space shuttle mission, and the spacecraft was called Challenger. Maybe some readers have heard of it.