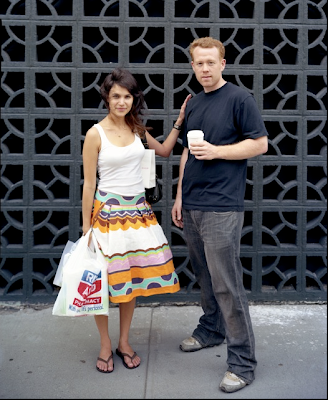 An interesting and culturally timely show coming up - Richard Renaldi will be exhibiting photographs from his new series "Touching Strangers" at The Gallery at Hermès, 691 Madison Avenue, New York, starting April 9.

Touching Strangers is an ongoing photographic project stemming from my interest in the dynamics of group portraiture. The premise of this work is simple. I meet two or more people on the street who are strangers to each other and to me. I ask them if they will pose for a photograph together with the stipulation that they must touch each other in some manner...

My objective was to introduce an unpredictable variable in a very traditional photographic formula: to create a spontaneous and fleeting relationship between complete strangers in front of my 8 x 10 view camera.

Though these situations involve orchestrated collaborations between subject and photographer, the emotions captured are both genuine and honest. Touching Strangers encourages viewers to think about how we relate physically to one another, and to entertain the possibility that there is unlimited potential for new relationships with almost everybody passing by.

Renaldi has been exhibiting since he was a senior at NYU in 1990 and his website is the most complete website I have ever seen. He is also one of the most consistent and prolific photographers I know of producing, new bodies of work, books, exhibitions, a blog, and various other projects at a pace that would exhaust even the most energetic person.

Clearly a person who loves to share, one of my favorite parts of Renaldi's site is his library of self-published PDF books ranging in subject from "Our Trip to Burning Man. 2007" to "Hot Italian Guys". But make sure you have at least half an hour to spare before delving into Renaldi's website.

Anyway, back to "Touching Strangers" - here's a selection of more images from the project below. I'll leave you to explore the rest of the site on your own. 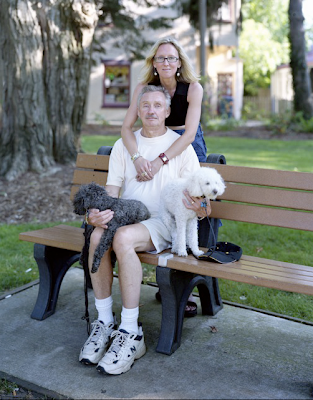 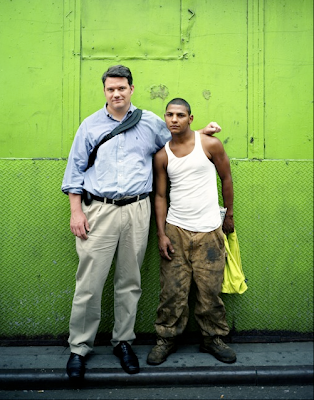 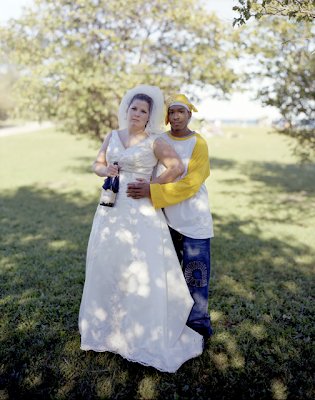 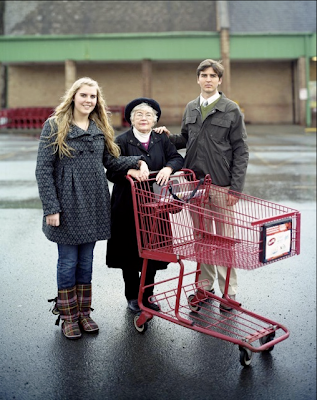 Well, they're touching photographs, aren't they? I wonder why these need to be shot with an 8 x 10 view camera. I guess I'll have to go to the photog's site to find out. I have more than a half hour to spare. I'm at work!

What an interesting concept. You can sense the subjects' feelings about touching by the way they posed themselves. Or maybe I'm just reading into them what I would be feeling. All in all great photographs.

Such a simple but effective idea. You can feel some people's tension, and others excitement. Wonderful idea and execution.

I love this! The arm on the shoulder, maybe we've seen the same poses over and over. I will have to check out his site to see if anyone made a funny pose--which is what I would've done.

I really love this concept. It's such a simple idea but it gives you something to think about. People barely say hello to each other when passing on the street, and taking the time to physically touch a stranger is an experience. I love how he is capturing the experience as well as turning out great photos. =]

I'm guessing he used 8X10 for that amazing shallow depth of field and clarity. I particularly like the polar opposite character portraits.